More than 300 guests attended the event to celebrate with the finalists and newly crowned champions of Thoroughbred racing in Canada for 2013.

In an effort to promote equal opportunity in determining the winners for 2013 in the 17 race award and 3 media award categories, the voting began January 2, 2014, allowing for statistics for the entire year to be considered.  This year the Jockey Club of Canada announced the top four finalists in each category as determined by the online ballots of 41 knowledgeable voters.  The media category awards were determined by the Professors of Humber School of Media Studies and Information Technology, in Toronto, Ontario.  Three finalists were announced in the three media categories.

The Jockey Club of Canada is pleased to announce the 2013 Sovereign Award winners in the order in which they were presented. 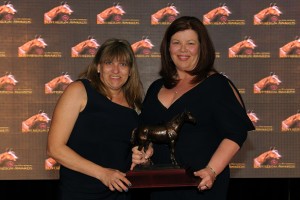 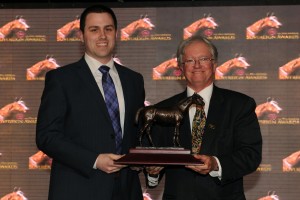 Alex Campbell (left) was the winner in the Outstanding Writing Media Category and was presented with a Sovereign Award by John Stapleton, President of the Canadian Horse Racing Hall of Fame 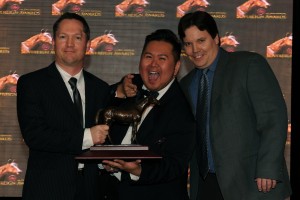 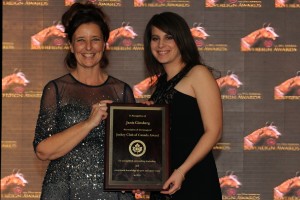 Janie Ginsberg (right) was recognized with a plaque from The Jockey Club of Canada presented by the Club’s Executive Director, Stacie Roberts

The Jockey Club of Canada Award – the inaugural award was presented to           Janie Ginsberg at the School of Media Studies and Information Technology, Humber Institute of Advanced Technology and Advanced Learning in Toronto in January 2014.  This monetary award is presented to a student entering their final year of study, who has exemplified outstanding leadership inside and out of the classroom; who has showcased exceptional knowledge of sport and sport issues with special consideration given to those who have reported on issues relating to Canadian thoroughbred coverage.  Tonight Janie was presented with a plaque in recognition of receiving the award. 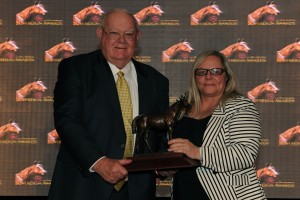 William Graham was accepted the lifetime achievement Sovereign Award for his broodmare, Captivating. The award was presented by Julie Coulter, General Manager of the CTHS Ontario Division

A finalist in this category in 2012, Captivating has proven to be a keeper for Sovereign Award winning breeder Bill Graham. The 12-year-old Ontario-bred is the dam of 2012 Canadian Horse of the Year and Champion two-year-old colt Uncaptured. A son of Lion Heart, Uncaptured continued his superb career in 2013 by winning the Prince of Wales Stakes at Fort Erie and placing in five other stakes races, three of them graded. Uncaptured, raced by John Oxley, has earned over $1 million. Captivating’s first foal to race is stakes winner Dancing Raven, a filly by Tomahawk who won two stakes races at Woodbine and over $396,000. Captivating has a 2011 filly by Majestic Warrior and a 2013 filly by Uncle Mo. 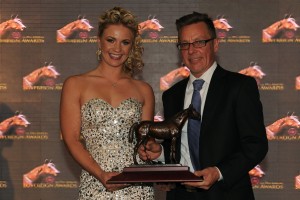 A nominee in this category in 2012, Skye Chernetz had an even better second season as an apprentice. Chernetz, who grew up in Winnipeg, Manitoba is the daughter of one of Canada’s first women riders, Bonnie Eshelman.  Chernetz knew she wanted to ride racehorses at the age of 8 and learned her skills at her hometown’s Assiniboia Downs. She set up shop for her first season as a jockey at Woodbine racetrack in 2012 under the wing of veteran trainer Dave Cotey. She won her first race in May of 2012. Chernetz won her first stakes race when she guided the 2-year-old filly On Rainbow Bridge to victory in the Shady Well Stakes at Woodbine for Triple K Stable and trainer Cotey followed by a second stakes win, the Nandi, on the same filly in August. 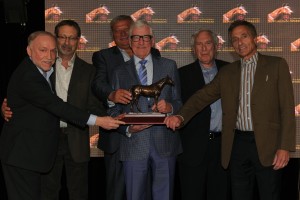 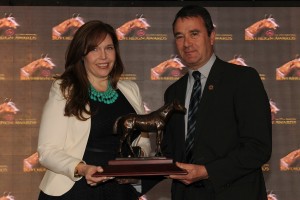 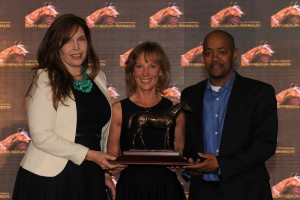 Kathryn Sullivan (left) and David Adams (right), Assistant Trainers for Mark Casse, accept the Sovereign Award for Oustanding Trainer on behalf of Mark Casse. The trophy was presented by Yvonne Schwabe, CTHS of Ontario Director and Member of the Jockey Club of Canada

A five-time winner in this category including the past two seasons in succession,  Mark Casse and his team continued its successful run as Woodbine’s leading stable in 2013. Casse won 85 races at the meeting (and one at Fort Erie: Uncaptured scored in the Prince of Wales Stakes, the second jewel of Canada’s Triple Crown) to lead all conditioners at the Toronto track. Casse won 19 stakes races in Canada, three of them graded events, won by Madly Truly, Laugh Track, My Conquestadory, Delegation, Sisterly Love and Delightful Mary. Laugh Track went on to finish a fast-closing second in the Grade 1 Breeders’Cup Sprint at Santa Anita in November and My Conquestadory won the Grade 1 Alcibiades at Keeneland.  Sisterly Love, was named Champion Older female in Canada tonight and Delegation, was a 2013 Sovereign finalist for Older Male. 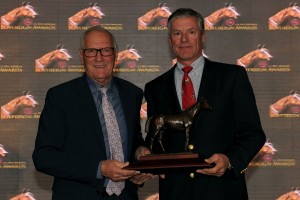 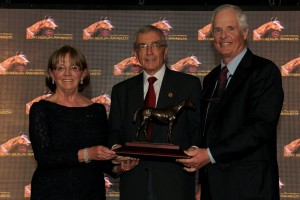 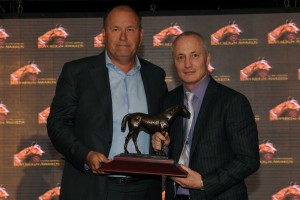 One of Canada’s longtime leading breeders of top-class thoroughbreds, Sam-Son Farms is a perennial finalist in this category. Now operated by Mark and Kim Samuel and Rick Balaz and family.  Sam-Son was a finalist in this category in 2012 and it has won the Outstanding Breeder award 7 times in its history. The stars of 2013 included nine stakes horses led by Grade 1 winner Up With the Birds, named  champion three-year-old male and 2013 horse of the year tonight.  Up With the Birds won the G1 Jamaica Handicap at Belmont Park as well as the Breeders’Stakes, the third jewel of Canada’s Triple Crown, the Marine and Black Gold Stakes. He was also a close second to Midnight Aria in the Queen’s Plate. Sam-Son also bred graded stakes winners His Race to Win (G3 Ontario Derby), Part the Seas (G2 Bessarabian Stakes) plus Dance Again, Smartyfly and graded stakes placed Irish Mission. 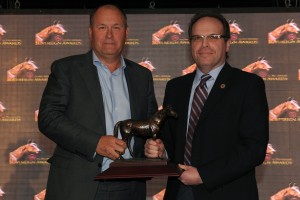 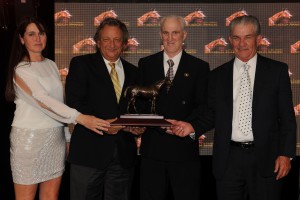 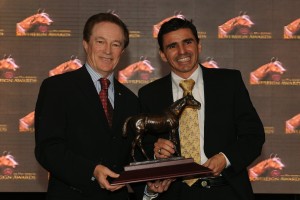 Nearing his 10th year riding at Woodbine, Eurico da Silva had his second best season ever as a jockey in 2013 by purse earnings. Born in Brazil, Da Silva is a popular member of the Woodbine jockey colony and he rode to the top of the charts in 2010 as he led all riders by wins and purses and was named the Sovereign Award winning Outstanding Jockey. He was second in wins in 2013 to Luis Contreras but led the colony by purse earnings and his 27 stakes wins was easily the best of any rider in Canada in 2013. Da Silva rode for big stables such as Sam-Son Farms and trainer Mark Casse and won on stars such as Up With the Birds, My Conquestadory, Forte dei Marmi, His Race to Win and Overheard. 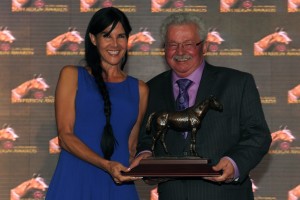 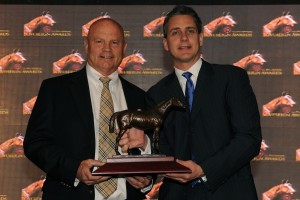 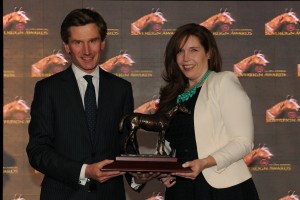 This is the second consecutive Outstanding Owner win for Oklahoma oilman John Oxley, the leading owner at Woodbine by purse earnings the past two seasons. In 2013, the Oxley runners, which are trained by Mark Casse won 27 races which included nine stakes races. The stakes wins were by nine different horses, illustrating the strength of the Oxley bench. A couple of fillies, the 4-year-old Delightful Mary and the 2-year-old Madly Truly, won graded races: the former scored in the G3 Hendrie Stakes and the latter won the G3 Mazarine Stakes.  The other Canadian stakes winners were Canadian-breds Uncaptured, winner of the Prince of Wales Stakes at Fort Erie, Dynamic Sky, who won the Plate Trial Stakes, Spring in the Air, Matador, Northern Passion, Sky Commander and Sky High Lady. 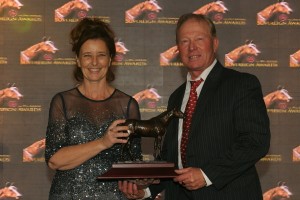 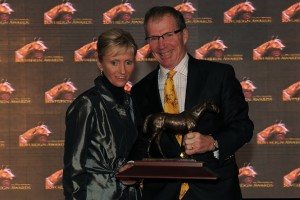 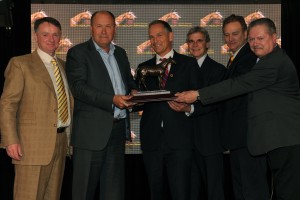 Dave Whitford (left) and Rick Balaz and team accept the Horse of Year Sovereign Award for Up With the Birds from Jockey Club of Canada Chief Steward, Jim Lawson (middle)

You don’t have to be a finalist to join the party so mark your calendars for April 2015 when the Jockey Club of Canada will be celebrating our 40th Annual Sovereign Awards.

Make the Sovereign Awards Party your social event of the year.