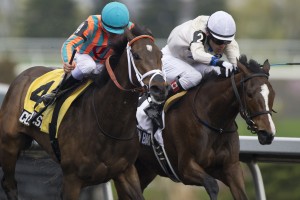 Not only did Paladin Bay pick up the winner’s share of $90,000, but she also reaped an additional bonanza, since, as an Ontario-bred, she earns 20% of the winner’s share plus an additional 40‎% for being an Ontario-sired product, by Sligo Bay out of Stormin Wife‎.   That brought her total take for the race to $144,000, some of which is donated on a regular basis to a church by the Ladouceurs.

Paladin Bay enjoyed a banner juvenile campaign, winning three of her nine outings, including the prestigious Princess Elizabeth Stakes and the Ontario Lassie over arch-rival Lexie Lou.  She banked $378,500 for the year, and was a close runner-up in balloting to Ria Antonia for a Sovereign Award as Canada’s top two-year-old filly.

Paladin Bay entered the Selene off a second place finish to Zensational Bunny in the six furlong Star Shoot on April 19.  But bigger things are on the horizon.  She will now not only enter the $500,000 Woodbine Oaks, presented by Budweiser on June 15, the classic for Canadian-foaled three-year-old fillies as one of the favourites, but her connections have also kept her eligible for Canada’s most famous race, the Queen’s Plate on July 6.

The last filly to win the Selene and the Oaks was Gold Strike in 2005.

Jockey Club of Canada Stewards Come Out in Support of HBPA