TORONTO, December 9 – Track announcer Dan Loiselle, the voice of Canadian horse racing, announced today that he will call his last race at Woodbine Racetrack on May 31, 2015, bringing a 29-year career as thoroughbred race caller to a close.

“It’s been an absolute privilege to announce some of Canada’s greatest races. My family and I owe everything we have to horse racing,” said Loiselle. “I want to thank the racing fans for all the kind things they have said to me over the years, my fellow employees at Woodbine Entertainment and the horse people. We are a family here at Woodbine, and I have formed friendships that will last a lifetime.”

A native of Scarborough, Ontario, Loiselle got his start at Woodbine, then known as the Ontario Jockey Club, as an assistant race secretary in the standardbred division and backup announcer on August 1, 1967.

During his 17-year tenure as a standardbred announcer, Loiselle stamped his voice on some of the circuit’s most important races including the North America Cup, Maple Leaf Trot and Breeders Crown. 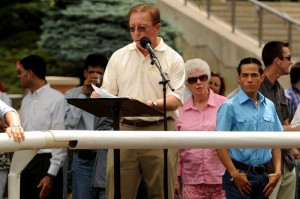 On July 23, 1986, Loiselle took over from race caller Daryl Wells launching a memorable career that will leave his calls indelibly inked on no less than 28 editions of the Queen’s Plate, the first jewel of the Canadian Triple Crown.

“The name Dan Loiselle is synonymous with Woodbine Racetrack. Wherever I travel in North America, racing customers and industry players alike instantly ask about Danny and recount one of his many memorable calls,” said Nick Eaves, Woodbine’s President and CEO. “His distinctive voice and ability to build a race call such that we are all hanging off every word separates him from the rest. Beyond being one of the industry’s very best race callers, Danny is a wonderful human being, always putting others ahead of himself.

“His loyalty to the company and his proud promotion of it at every opportunity make him one of the rare few. Woodbine has benefited immeasurably from Danny’s 47 years of dedicated service. It would be difficult to argue that he hasn’t earned his retirement, however his presence will be missed by the entire racing community. Although, everyone who knows Danny knows full well that we will still be hearing from him, just in a different way!”

“They come to the final sixteenth, and Canada salutes the Breeders’ Stakes winner and the Triple Crown champion…Wando was better than wonderful this afternoon, he was magnificent!”

Loiselle demonstrated his knowledge and appreciation for racing history with a timely call of the 2001 Queen’s Plate as Dancethruthedawn, with Win City breathing down her neck, tried to emulate her mother Dance Smartly and full-brother Scatter the Gold’s success in the Gallop for the Guineas.

In 2013, Loiselle’s rich timbre worked in synchronicity with Wise Dan, the reigning U.S Horse of the Year, as he successfully defended his title in the Ricoh Woodbine Mile.

“They arrive at the top of the stretch in the Ricoh Woodbine Mile and Johnny Velazquez gives the green light to Wise Dan and his response is instantaneous…Wise Dan, here he is, the titan of the turf, the sensational Wise Dan!”

In a career filled with historic racing moments, Loiselle also found time to add a touch of humour to his colourful racing commentary with a bit of word play, focused on the horses, such as “Doctorintheouse is operating on a one-length advantage.”

Recently, a horse racing erratically down the lane was deemed to be, “running through the stretch like a broken shopping cart.”

Loiselle’s catch phrase of “Picture Time!” boomed across the grandstand for many a photo finish.

His voice has travelled across the continent adding a Canadian accent to five all-star announcer days having stepped up to the mic at Churchill Downs, Belmont Park (twice), Arlington Park and Monmouth Park.

In addition to calling the races, Loiselle has played a vital role as master of ceremonies for a myriad of functions including Sovereign Awards, O’Brien Awards, Canadian Thoroughbred Horse Society Awards and LongRun Galas.

With more than 55,000 race calls to his name, Loiselle’s formidable career in horse racing will come to a close at the end of May.

“It just feels like the right time,” said Loiselle. “In 2015, I’ll have worked at Woodbine Entertainment for 48 years. It’s time for my family and myself to enjoy our summers, travel this great country of ours, and enjoy some time at the cottage.”

Nick Eaves stepping down as CEO of WEG