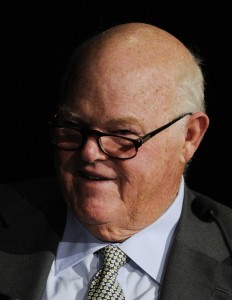 Ogden Mills (Dinny) Phipps, who has served as the chairman of The Jockey Club for the past 32 years, announced today that he will resign his chairmanship, effective Saturday, August 8, 2015. The Jockey Club’s board of stewards will meet on that day, following the annual meeting of the membership.

Phipps, 74, a prominent Thoroughbred owner and breeder, was elected to membership in The Jockey Club October 16, 1965. He became chairman February 10, 1983. His tenure as chairman is the longest in the history of the organization, which was created in 1894. August Belmont served for approximately 30 years (January 24, 1895, until December 10, 1924).

“The Jockey Club has undergone many changes over the past 30 years and we have built a solid foundation that will help grow and sustain Thoroughbred breeding and racing in the years ahead,” Phipps said. “Due to some ongoing health issues, I feel like this is a good time to pass the baton and I want to express my gratitude to the members and the employees of The Jockey Club for their dedication to this sport over the past three decades.”

Under Phipps leadership, the organization has earned widespread recognition as an industry leader in the areas of medication reform, equine welfare, data collection and dissemination, technology and marketing of the sport.

Among The Jockey Club’s accomplishments since 1983:

Under the chairmanship of Phipps, The Jockey Club also hosts the Round Table Conference on Matters Pertaining to Racing, the Welfare and Safety of the Racehorse Summit, and the Thoroughbred Owner Conference. Last week in New York City, it co-hosted the 2015 Pan American Conference, attended by more than 300 industry representatives from 27 countries.

A nominating committee will recommend candidates to succeed Phipps as chairman. The committee consists of three members of The Jockey Club: Fravel (committee chair), Willmott, and D.G. Van Clief Jr.