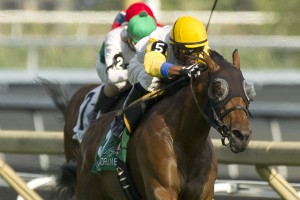 WEG press release – TORONTO, August 16- Charles Fipke’s homebred Danish Dynaformer seized the lead in mid-stretch and drew off to a huge 7 ¾- length win in the 125th running of the $500,000 Breeders’ Stakes, third jewel in Canada’s Triple Crown of Thoroughbred Racing, Sunday at Woodbine.

The son of Dynaformer competed in all three legs of the Triple Crown, finishing a close second in the Queen’s Plate to Shaman Ghost and sixth in the Prince of Wales to Breaking Lucky, but was clearly best in the 1 ½-mile turf Breeders’.

Jockey Patrick Husbands, who now has four Breeders’ Stakes wins tying him for the most in the Triple Crown era with Sandy Hawley and Robin Platts, guided the Dynaformer colt to trainer Roger Attfield’s record-extending ninth Breeders’ title.

Conquest Boogaloo was second, edging out Lucky Lindy and Ault, who were third and fourth, respectively.  The running time was 2:29.28 over the E.P. Taylor Turf Course.

Danish Dynaformer stalked early pacesetter Samuel Dechamplain for the first mile and a quarter of the Breeders’ through clips of :25.80, :52.20, 1:17.10 and 2:05.52. As the field turned for home, Husbands began nudging his mount as did Robby Albarado aboard Lucky Lindy. But soon after, it was all over as Danish Dynaformer emerged from the pack and extended his lead to the wire.

Attfield was proud of the now-four-time winner’s effort, especially after his fruitless run in the Prince of Wales.

“I was delighted with him.  He’s a really nice horse,” said Attfield. “This is what he wants to do. We made a big mistake going into the Prince of Wales but it didn’t bother him. He worked well all week. He just ran phenomenally.”

Husbands felt keeping Danish Dynaformer free of trouble was the key to the victory.

“He broke sharp and I let him run away from there because I didn’t want to get boxed in,” Husbands said.  “He can be quite aggressive.

“I give all my respect to Roger. I breezed him on the dirt and he breezed so good I said to Roger, ‘How come he’s not going to the Prince of Wales? Roger said, ‘He’s not bred for the race.’ Unfortunately, we went in the race and it was no good.”

“It was rough in the first part but he came with a big run,” Garcia said. “It was unlucky we were a little too far back, we followed the wrong horses and we ended up going backwards. It was just a tough trip.”

Lucky Lindy appeared to be a threat at the head of the lane, but he too succumbed to the much-the-best winner, according to jockey Robby Albarado.

“At the three-eighths pole I took a little run at the winner,” Albarado said. “He was the horse to beat and I made him work for a little while, but he showed his class and went on.”

Danish Dynaformer earned $300,000 for the win to push his career bankroll to over $608,938. He broke his maiden in February of this year on the turf at Gulfstream Park and romped in an allowance race over yielding turf at Keeneland.  He won the Plate Trial Stakes on June 14 on Woodbine Polytrack, setting the stage for his narrow loss to Shaman Ghost in the Queen’s Plate.