Congratulations to Woodbine’s leading trainer Mark Casse on his two winners at this year’s Breeders’ cup Championships at Keeneland in Kentucky. 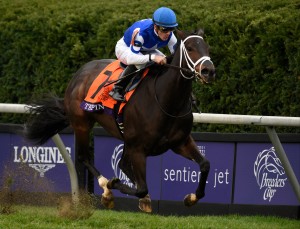 Mark’s first ever Breeders’ Cup win was with Catch a Glimpse on Friday.  His second win was on Saturday with Tepin in the G1 $2,000,000 BC Mile for owner Robert Masterson.  Jim and Susan Hill’s Grand Arch, trained by Brian Lynch finished a very respectable third in the race behind 2015 Woodbine Mile winner, Mondialiste (IRE) in second.

Other Canadian connected winners at this year’s Breeders’ Cup include: