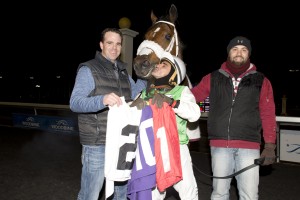 There were familiar names on top of the leader board at the end of Sunday’s 14-race season-ending card at Woodbine which featured a record closing day handle of $6,546,737 as the 133-day meet came to a close on November 29, eclipsing the $5,406,444 wagered a year ago.

Trainer Kevin Attard, who sent out Melmich to a track record performance in the closing day Grade 3 Valedictory Stakes, landed in the top 5 of the trainer standings for the first time finishing second with 48 wins improving on his 29 triumphs in 2014. Nick Gonzalez and Mike DePaulo tied for third with 43 wins.

Eurico Rosa da Silva, a Sovereign Award winner as outstanding rider in 2010 and 2013, won four races on Sunday’s card to finish as the leading rider with 201 wins in 2015 improving on his 144 wins a year ago.  It marks the second riding title for da Silva who led all riders in 2010 with 190 victories.  Luis Contreras, three times the meet’s leading rider, finished second with 177 wins.

Mickey Walls’ classic 1991 record of 221 wins remains the most victories posted in a single meet.

In July, Stronach Stables’ homebred Shaman Ghost ($8.60), ridden by Rafael Hernandez, hauled down Danish Dynaformer inside the sixteenth pole to win a thrilling 156th edition of the $1 million Queen’s Plate, Canada’s most famous horse race, by one and one-quarter lengths.

It marked the third Plate win for Frank Stronach, following two other homebreds, Basqueian in 1994 and Awesome Again in 1997, but it was the first for trainer Brian Lynch and the first for Hernandez, with his first Plate mount. Shaman Ghost went on to finish second in the Prince of Wales Stakes, second jewel of the Canadian Triple Crown, at Fort Erie, falling a neck shy of Breaking Lucky.

It marked a record-breaking third consecutive win in the Pattison for Moore, after directing Joshua Tree in 2013 and Hillstar in 2014, the first rider to do so since the race became a turf classic in 1958. It was also the third International win for trainer Sir Michael Stoute, following champion Singspiel in 1996 and last year with Hillstar.

Miss Victoria, with six wins from eight starts in the claiming ranks, tied with Grade 3 Valedictory champ Melmich to lead all horses in wins at the meet. The Plate winner, Shaman Ghost, who also captured the Grade 3 Marine Stakes in May, was the leading purse earner with $690,000.

TRC - Seven reasons Woodbine might have a bright future after all