The Jockey Club of Canada Board of Stewards are proud to announce that R.J. (Russell) and Lois Bennett will be presented with the E.P. Taylor Award of Merit for their longtime involvement and commitment to Thoroughbred Racing in Canada. 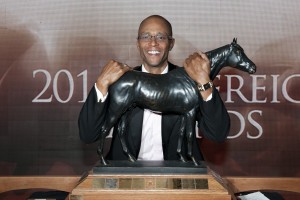 The Jockey Club of Canada will host the 41st Annual Sovereign Awards Ceremony to honour the Canadian Champions of 2015 and to celebrate Thoroughbred racing in Canada on Friday, April 8, 2016 at Woodbine Racetrack in Toronto, Ontario.

The cocktail-attire celebration will include an opportunity to walk the Sovereign Award Red Carpet upon arriving at the “bubbly” reception followed by a buffet-style gourmet dinner and the presentation of the Sovereign Award Trophies to Canada’s racing Champions of 2015 and Canada’s 2015 Horse of the Year.

Even if you are not a finalist, you’re invited to come and have fun and celebrate with the 2015 Champions of Thoroughbred Racing in Canada.

This year’s event will once again be held on the eve of the start of Thoroughbred racing in Canada with Woodbine Racetrack’s 2016 Thoroughbred season beginning the next day at 1:00 pm (EST), Saturday, April 9.

Tickets to the 41st Annual Sovereign Awards Ceremony are $250 each and tables of 10 are slightly discounted at $2400.  All tickets are plus applicable taxes and must be reserved in advance by contacting The Jockey Club of Canada at 416-675-7756 or email: jockeyclub@bellnet.ca