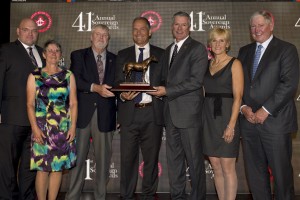 More than 270 guests were in attendance to celebrate with the finalists and the newly crowned champions of Thoroughbred racing in Canada for 2015.

The Jockey Club of Canada is pleased to announce the 2015 Sovereign Award winners in the order in which they were presented. 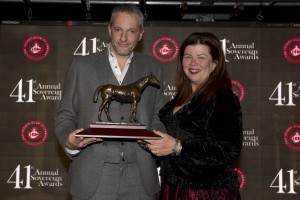 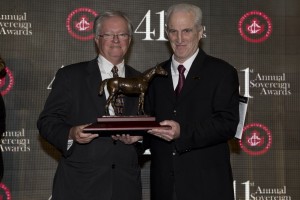 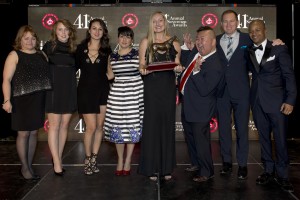 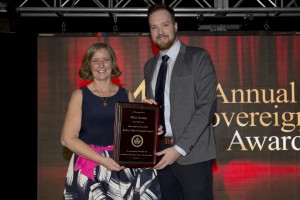 The Jockey Club of Canada Award – the annual award was presented to Nick Beare at the School of Media Studies and Information Technology, Humber Institute of Advanced Technology and Advanced Learning in Toronto in November 2015.  This monetary award is presented to a student entering their final year of study, who has exemplified outstanding leadership inside and out of the classroom; who has showcased exceptional knowledge of sport and sport issues with special consideration given to those who have reported on issues relating to Canadian thoroughbred coverage.  Nick received a Jockey Club of Canada plaque in recognition of receiving the award. 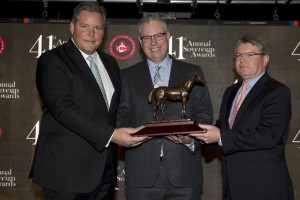 Purchased for just $5,400 as an unraced 2-year-old, the aptly-named Rare Opportunity has been a superior horse for Rod Ferguson and Anderson Farms. A brilliant racehorse with a limited career, Rare Opportunity was third in the Grade 2 Black-Eyed Susan Stakes at Pimlico in only her third career start. In the breeding shed, her foals have sold at auction for more than $1.3 million and they have earned over $1.5 million. Her 2015 star is Tower of Texas, a finalist for Champion Male Sprinter. The son of Street Sense is the 11th foal of his dam and he won the King Edward Stakes (Grade 2) at Woodbine in 2015. Rare Opportunity’s other stakes winning foals were Street Sounds (by Street Cry (Ire)), winner of the Beaumont Stakes (G2) at Keeneland and earner of over $505,000 and Wonder Where Stakes winner Silver Highlight (by Silver Charm). 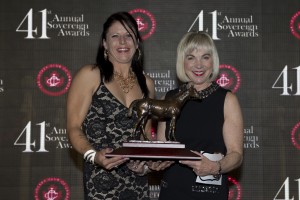 This is the second nomination for Erika Smilovsky for Outstanding Apprentice rider as she also made the short list at the 2014 Sovereign Awards. Smilovsky rode almost exclusively at Woodbine during 2015 but certainly one of her biggest moments came at Fort Erie in September when she guided Johnny La Rue to victory in the popular Puss n Boots Cup Stakes. Smilovky, who is from Pickering, ON, began her horsebacking career as a top Quarter Horse jockey. With over 40 wins in two years as a Thoroughbred rider, she has certainly made a smooth career change. 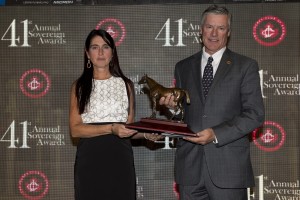 The Sovereign Award for Champion Older Male was accepted by Trainer Josie Carroll (L) on behalf of the owners of Are You Kidding Me presented by Jegg Begg Chief Steward of The Jockey Club of Canada.
michael burns photo

Champion Older Male – Are You Kidding Me
Dk.B H 5 by Run Away and Hide – Sweet Awakening (Street Cry (IRE)) 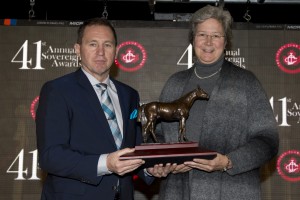 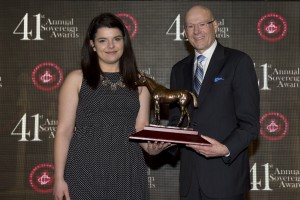 There seems to be no stopping the Canadian division of the Mark Casse stable as it won its ninth consecutive training title at Woodbine in 2015, 10th overall, and Casse has won four straight Sovereign awards for Outstanding Trainer. The numbers were big again in 2015 with 14 stakes wins in Canada and remarkably, each one came with a different horse. The stable stars included Natalma Stakes (G2) winner Catch a Glimpse who went on to become Casse’s first Breeders’ Cup winner when she took the Juvenile Filly Turf in November at Keeneland. Casseís other Canadian stakes winners included Summer Stakes (G2) winner Conquest Daddyo, Connaught Cup Stakes (G2) winner Lockout and the ultra-consistent Season Ticket, who won the Wonder Where Stakes. Catch a Glimpse and Conquest Daddyo are Sovereign finalists this evening. 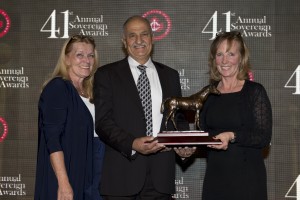 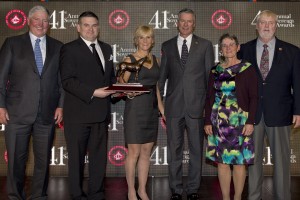 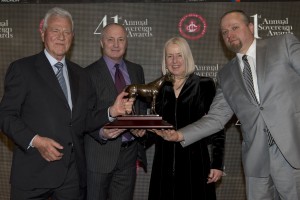 Frank Stronach’s Adena Springs has won this category nine times and 2015 may have been one of the farms most successful seasons in decades. The farm was represented by Grade 1 winners Private Zone and Judy the Beauty, both hard-knocking American-based performers but it also raced its homebred Shaman Ghost, winner of the Queen’s Plate. Shaman Ghost, a Sovereign award nominee for Champion Three-Year-old Male, was the first Plate winner raced by Stronach since Awesome Again won in 1997. Adena also bred Coronation Futurity winner Shakhimat, an early favourite for the 2016 Plate and bred horses that won or placed in 18 stakes races. 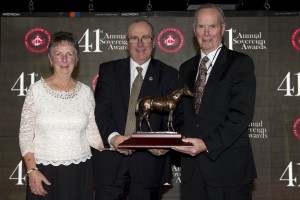 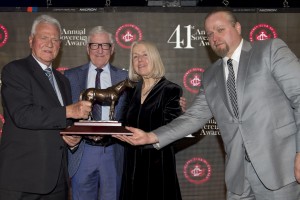 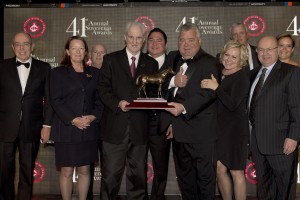 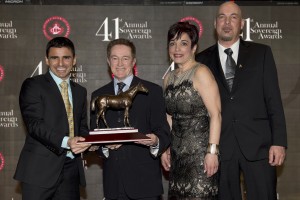 Outstanding Jockey Eurico Da Silva (L), presenter Hall of Fame jockey Sandy Hawley, with Rose and Enzo Tersigni, parents of Eurico’s biggest fan, Alexandrea. Alexandrea passed away in January 2015 and Eurico dedicated his 2015 season to his young friend and was determined to earn the Championship in her honour.
michael burns photo 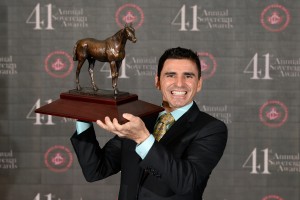 Two-time Sovereign Award winner Eurico Rosa da Silva won more races in 2015 than he ever has in one season since he came to Woodbine in 2004. Da Silva rode the winners of 202 races to lead all Canadian riders during the season. His 17 stakes victories came aboard stars such as Sovereign Award nominated older horse Melmich and Miss Mischief, a contender for two Sovereigns this evening. 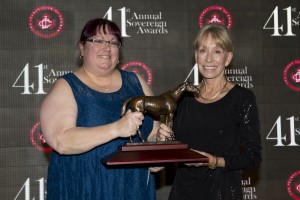 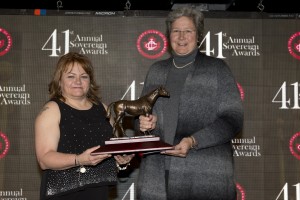 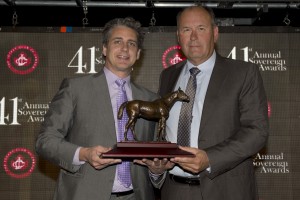 The famed Sam-Son Farm continues to produced top class horses 50 years after the stable was founded by the late Ernie Samuel. Sam-Son has won the Outstanding Owner title 10 times since 1975, the most recent in 2010. The Sam-Son team was the leading owner in Canada with purses over $2.2 million earned by five stakes winners including Grade 3 Durham Cup winner Golden Sabre. 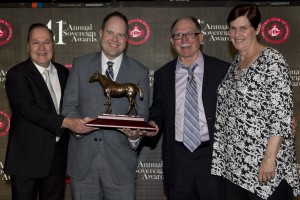 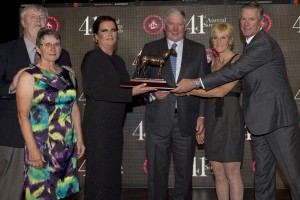 You don’t have to be a finalist to join the party so mark your calendars for April 2017 when the Jockey Club of Canada will be celebrating the 42nd Annual Sovereign Awards.

Make the Sovereign Awards your social event of the year.

Sovereign Awards to be Streamed Live