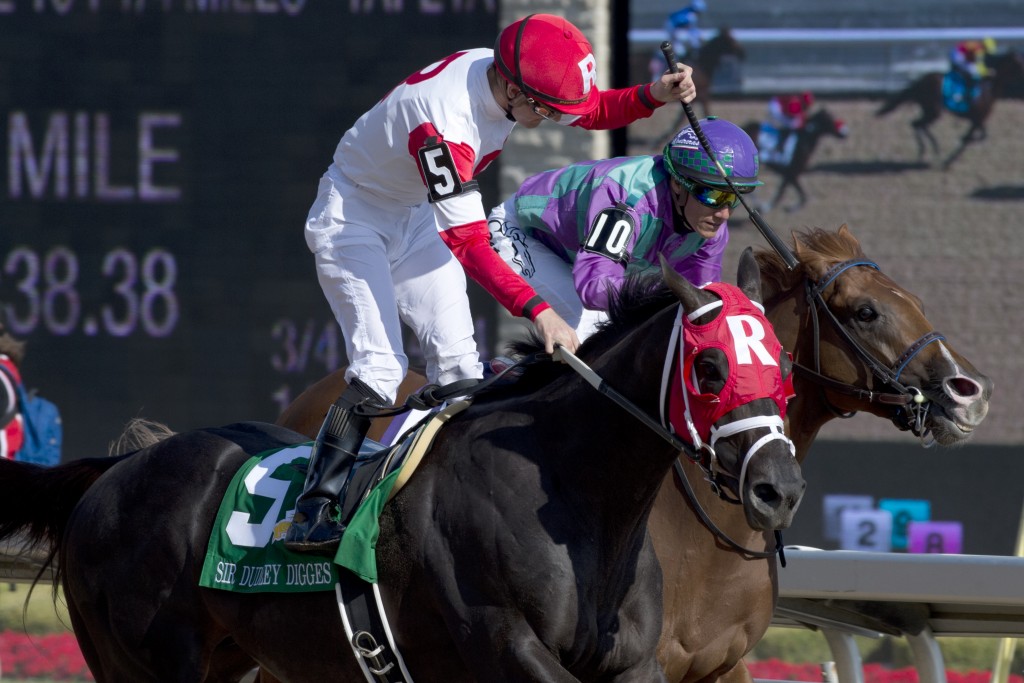 The mile and a quarter Queen’s Plate, which is North America’s oldest annually-run stakes race, went with a field of 13 Canadian-bred 3-year-olds including three entrants based south of the border.

Shakhimat, looking to give trainer Roger Attfield a record ninth Queen’s Plate win, took over from Cheburashka after an opening quarter of :24 and continued in front through a half in :49.80 and three-quarters of a mile in 1:14.74.

Meanwhile, Sir Dudley Digges was tracking the pace from sixth in comfortable range and had moved into striking position as the field turned into the stretch. He continued his forward progress to hit the front in deep stretch while finishing in 2:04.09.

“He broke good; he put me in a good spot,” said Leparoux. “In the first turn they slowed down so much I was a little bit worried. In the backside they started picking it up. He just grinded and grinded the whole way.”

Amis Gizmo, who had moved smartly around the final turn to take command through a mile in 1:38.10, held a length advantage a furlong out but could not withstand Sir Dudley Digges.

Favored at 5-2 under jockey Luis Contreras, Amis Gizmo had won the 1 1/8-mile Plate Trial with Shakhimat second and Sir Dudley Digges third in his first trip to Woodbine and a start over the surface which Maker believed had enhanced his Queen’s Plate chances.

Amis Gizmo was one of two entrants trained by Josie Carroll for owner/breeder Ivan Dalos.

“I tried to relax my horse as much as I could and wait until the quarter pole to make my move. They just got me at the end.  He was fighting back. He pinned his ears back and kept running but the winner had a little bit more.”

All On Red ended third, 1 ¾-lengths behind the runner-up and a neck in front of fourth-placed Scholar Athlete in a solid effort.

“My trip was okay, but my horse was running a little bit too relaxed,” said All On Red’s rider Eurico Rosa da Silva. “Next time we’ll put blinkers on him and he’ll be a different horse. He handled the distance no problem.”

Shakhimat, the co-second choice at 4-1, had no response once he turned for home, ending fifth but beaten just 3 ½- lengths.

Leavem in Malibu, making his stakes debut for trainer Mark Casse, was racing greenly through the early going and was gobbling up ground late after racing in last place through the first three-quarters of a mile.

Rocket Plan, Cheburashka , Narrow Escape, Esposito, My Name Is Jim and Mike closed out the order of finish.  Scholar Athlete and Esposito are the other shippers from south of the border, training on the Fair Hill Tapeta surface in Maryland.

Leparoux had ridden Sir Dudley Digges on three previous occasions including the colt’s maiden-breaking victory at Keeneland on April 22.

“I rode him at Keeneland on the grass,” said Leparoux. “Last time I couldn’t come and ride him. I knew he had a shot. It was the trip we needed.

“It feels great,” continued Leparoux, who was winning his first Queen’s Plate in his third try.“ It’s an amazing feeling. He ran a big race. I am happy for the horse’s connections.”

While Maker was saddling his first Queen’s Plate start, the Ramseys were second-time starters as they were here to watch their favored We Miss Artie finish fourth in the 2014 running.

Sir Dudley Digges, bred in Ontario by Bernard and Karen McCormack, was making his ninth career start while recording his second win in the Queen’s Plate.

“He’s a laid-back horse, and it took him a while to come around,” said Maker.

The trainer indicated that Sir Dudley Digges now would be pointed toward the second jewel in Canada’s Triple Crown, the $500,000 Prince of Wales Stakes at Fort Erie on July 26.
“He’s been on dirt before, and even although they were maiden races I think he’ll be okay,” said Maker.