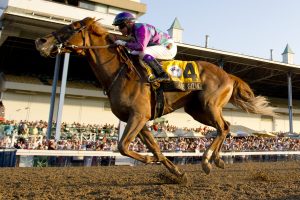 FORT ERIE, July 26 – Amis Gizmo, runner-up to Sir Dudley Digges in the Queen’s Plate, flourished on the dirt at Fort Erie with a dominating score in the 81st edition of the $500,000 Prince of Wales Stakes, second jewel of Canada’s Triple Crown of Racing.

The victory marked the first Prince of Wales win for trainer Josie Carroll and owner-breeder Ivan Dalos, as Amis Gizmo exacted revenge on his Plate rivals with a tour de force under rider Luis Contreras, who narrowly escaped injury after being dismounted from D C Love Bug in Sunday’s ninth race at Woodbine.
Cleared to ride for Tuesday night’s classic at Fort Erie, Contreras made a winning return on the undercard by guiding Dancing On Fire to victory in the Rainbow Connection Stakes and completed the added-money double with mutuel favourite Amis Gizmo in the Prince of Wales.

All On Red and Narrow Escape battled through splits of :22.79 and :46.48 in the 1 3/16-mile Prince of Wales with Amis Gizmo tracking their early pace.  Approaching the final turn, Contreras asked Amis Gizmo for more and the colt responded with a tremendous turn of foot to open up an insurmountable lead.  Clear by five lengths at the top of the lane, Amis Gizmo surged past the wire a no-doubt winner by 5 1/2-lengths.  Leavem in Malibu, last of eight in the early running, closed to earn second money by 3 3/4-lengths over Niigon’s Edge.  Amis Gizmo stopped the clock in 1:56.76.

Contreras pointed to his colt’s ability to settle as a key factor in the impressive performance.

“Early in the race, I had the opportunity to sit behind horses. My horse was so nice and relaxed,” said Contreras. “At the turn, I opened up a little to start to run and I had so much horse. I was handy the whole way. I was looking back to see where everybody was and they were a long way back. He finished very strong.”

The veteran rider, who won this event in 2011 with Pender Harbour, noted that the quick early fractions helped Amis Gizmo on the day.

An ebullient Contreras was no worse for wear following his fall at Woodbine.

“I was a little sore in my lower back. I’m a little bruised, but it doesn’t bother me when I ride,” said Contreras. “No nerves. I love to be on a horse and once I jump on the horse everything feels better.”

“I had a good trip. I dropped in on the first turn and saved ground and was right behind the winner on the backside, but I was kind of empty by the second turn. He didn’t take me anywhere today,” said Leparoux.

Leavem In Malibu, a closing fourth in the Queen’s Plate after a troubled beginning, showed a strong closing kick in the Prince of Wales while making just his fifth career start.

“He broke well today, got away clean. The dirt coming back at him got him a little further back,” said Boulanger. “He jumped up and down quite a bit, but he didn’t give up. He tried and kicked in. He didn’t run second to a bad horse and he’s probably got a lot more education than our horse does. He’s a nice colt.”

Amis Gizmo, a chestnut son of Giant Gizmo, was perfect in four starts as a juvenile winning the Simcoe, Bull Page, Frost King and Kingarvie Stakes.  Following a flat fifth-place run in the Wando Stakes to start his sophomore campaign, Amis Gizmo bounced back with an impressive 2 ½-length score in the Plate Trial.

The Prince of Wales marked the sixth win from eight starts for Amis Gizmo who now boasts career earnings of $787,423.

“We’re ecstatic about the day” said Tom Valiquette, chief operating officer of the Fort Erie Live Racing Consortium. “With a record crowd, and a new record of over $2,000,000 in wagering, it was our best Prince of Wales Day to date.”