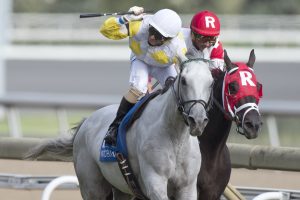 TORONTO, August 21 – Garland Williamson’s Camp Creek struck front in mid-stretch and went on to notch a 1 ¼-length win in the 126th running of the $500,000 Breeders’ Stakes, third jewel in Canada’s Triple Crown of Thoroughbred Racing, Sunday at Woodbine.

The son of Dunkirk, making his first appearance in the Triple Crown series, came into the race off a maiden-breaking effort on July 15, a 2 ¾-length triumph at 1 1/18 miles on the Toronto oval’s world-renowned E.P. Taylor Turf Course, and looked every bit as impressive today in the 1 ½-mile turf Breeders’.

Jockey Rafael Hernandez, who made the move to Woodbine for the 2016 campaign, notched his first Breeders’ score, as did trainer Rachel Halden, who joins Catherine Day Phillips (two wins), Debbie England and Josie Carroll as the other female conditioners to have won the event.

“I can’t say I was expecting it, but we were hopeful and thought he deserved a chance,” said Halden. “To me, he was just an improving horse. I’d been looking to get him on the grass for a while and when we did he won quite nicely and it looked like a stretch out in distance wouldn’t be an issue for him. Sometimes, when you have a three-year-old Canadian-bred you need to take a chance at these kinds of races.”

“When I passed the wire, I said, ‘I won.’ I can’t believe it,” said the veteran jockey, who had 21 wins from 141 starts at Woodbine heading into Sunday’s action.

Sir Dudley Digges, winner of the Queen’s Plate, was second, while Leavem In Malibu and Scholar Athlete, were third and fourth, respectively. Mutuel favourite Conquest Daddyo was fifth. The running time was 2:29.45 over ‘firm’ going.

Camp Creek set up shop near the back of the 11-horse field as Scholar Athlete, hounded by Narrow Escape tussled through clips of :24.99, :49.66 and 1:15.30. As the field turned for home, Scholar Athlete was confronted by Prince of Wales Stakes champ Amis Gizmo, while Hernandez unleashed Camp Creek to the outside of his rivals.

“At the three-eighths (pole), I started to ask him to pick it up,” said the winning rider. “When we turned for home, I put him clear and he did everything on his own.”

The finish was much more uneventful than the start for the grey and his jockey.

“It was a great trip,” he said. “I had to ride him a little bit early and I kind of inherited the lead on my own turning for home. He kept on but the winner ran by me with authority. It’s a rare distance for these horses at this point in their career, but he handled it well.”

Today’s victory was by far the biggest payday for Camp Creek, who came into the Breeders’ with one win and a third from four starts.

The race is one of several lucrative turf features on the Woodbine calendar. The $1 million Woodbine Mile is slated for September 17 and the $1 million Pattison Canadian International, both Grade 1 features, will be contested on October 16.