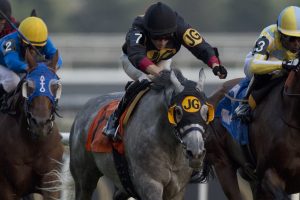 Six Yearling Sales Stakes, worth more than $900,000, will be staged Wednesday evening at Woodbine.

Sponsored by Ontario Lottery & Gaming (OLG), the six stakes, annually showcasing Canadian-bred yearlings purchased at previous Canadian Premier Yearling Sales, will feature two-year-olds and three-year-olds and upward competing in both Tapeta and turf events in a night billed as the Canadian Millions Sales Stakes.  The 2016 Canadian Premier Yearling Sale is set for Thursday, September 1 in the Woodbine Sales Pavilion.

The $125,000 OLG Halton, presented by Tipperary Equestrian at 7:15 p.m. for three-year-olds and upward, has attracted a field of seven for the one mile turf contest.  Hampstead Heath will look to win his third straight Halton, but will have to topple a salty group that includes graded stakes winners Dynamic Sky, trained by Mark Casse for John Oxley, and Aldous Snow, trained by Malcolm Pierce for owner-breeder Sam-Son Farm.

Next up is the $125,000 OLG Elgin Stakes, presented by Bear Stables, for colts and geldings three and up, at one mile and one-sixteenth over the Woodbine main. A field of five will go postward at 7:45 p.m., headed by Melmich, who was a two-length winner of this event last season. Melmich, a five-year-old Wilko chestnut bred in Ontario by Andrew Stronach, won six of eight starts in 2015 for trainer Kevin Attard and owners Stephen Chesney and Cory S. Hoffman. Melmich, who has already captured the Grade 3 Dominion Day Stakes this season, will be challenged by recent Shepperton Stakes winner Kingsport.

The six furlong, $125,000 OLG Kenora, presented by HBPA of Ontario at 8:15 p.m. for three-year-olds and up, attracted nine starters for the Tapeta stake, including defending champion Rexton for trainer John Mattine and owners RCC Racing Stable and Rocco Forgione. A talented group includes recent Ballade Stakes champ River Maid, a filly, trained by Robert Tiller for The Very Dry Stable; stakes-placed Conquest Twister, a three-year-old son of Twirling Candy trained by Mark Casse for Conquest Stables LLC; and the speedy Jacks Escarpment, who boasts a record of 3-2-2 from eight starts at the distance for trainer Nick Gonzalez and owner John Caulfield.

The six and one-half furlong, $200,000 OLG Muskoka, presented by Ken and Sarah Ramsey’s We Miss Artie, at 8:47 p.m., has attracted 14 two-year-old fillies. The wide-open affair is headlined by Hopping Not Hoping, a dark bay daughter of Silent Name trained by Barb Minshall for owners Murray Smith, Christopher Chop and Katharin Von Gavel. Last time out, Hopping Not Hoping captured the 6 1/2-furlong Shady Well Stakes over a yielding E.P. Taylor Turf Course to provide jockey Jeffrey Alderson with his first career stakes win.  Alderson retains the mount.  A solid field of juvenile fillies includes the stakes placed Raglan Road. Trained by John Ross, Raglan Road graduated on debut for Jack of Hearts Racing and JR Racing Stable in a 4 1/2-furlong maiden allowance tilt.  She has since come back to finish second in the Nandi and third, defeated less than a length, in the My Dear Stakes.

This year’s $200,000 OLG Simcoe, presented by Samuel, Son and Co., for two-year-old colts and geldings over six and one-half furlongs on Tapeta at 9:17 p.m., drew a field eight as Lokinforpursemonee and Pachi Cruze will continue their rivalry. Owned and trained by John Ross, Lokinforpursemonee, a bay Silent Name colt, finished second on debut to Pachi Cruze in the 5 1/2-furlong Frost King Stakes.  He arrives at the Simcoe from a rallying 3/4-length score in the open Victoria Stakes over six furlongs on the Woodbine main.  Pachi Cruze, owned and trained by Jose Corrales, won on debut at Laurel before shipping to Belmont Park to finish third in the Tremont Stakes.  He has made his last two starts at Woodbine, winning the Frost King and finishing well back last time out in the Vandal, contested over a yielding turf course.

Seven fillies and mares will contest the mile and one-sixteenth, $125,000 OLG Algoma, presented by Adena Springs Canada over the Tapeta at 9:46 p.m.  Galina Point will look to avenge her loss in last year’s Algoma, when defeated a narrow nose by Brooklynsway. The Saffir bay, trained by Mark Casse for owner Gary Barber, owns a record of 3-8-2 from 19 career starts.  She will be challenged by Trini Brewnette, winner of the 2015 South Ocean Stakes and recent runner-up in the $250,000 Bison City Stakes, second leg of the filly Triple Tiara, for trainer Dan Vella and owner Derek Chin.  Sweater Weather, a multiple stakes winner trained by Tiller for owner Frank DiGiulio Jr., boasts a field-best three wins at the 1 1/16-mile distance.  The five-year-old daughter of Milwaukee Brew, consistently in the money, is in search for her first win since taking the 2014 edition of the La Lorgnette Stakes.

First race post time on the eight-race card is 6:45 p.m. Fans can watch and wager on all the action via HPIBet.Com.