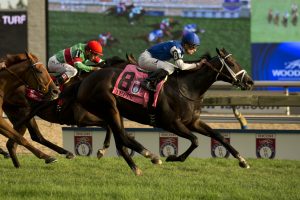 Tepin lived up to her billing as “Queen of the Turf” with a hard-fought score in Saturday’s Grade 1, $1,040,000 Ricoh Woodbine Mile.

Victory for the Eclipse Award winning mare in the Woodbine Mile, her first on Canadian soil, marked her eighth consecutive win overall and provided Tepin with an automatic berth in Santa Anita’s  Nov. 5  Grade 1, $2 million Breeders’ Cup Mile,  a race which she won last year at Keeneland.

Mark Casse, Tepin’s  trainer, was unable to make it to Woodbine when weather concerns grounded his private flight. But, Casse had a more than able deputy here in his son and assistant, Norman Casse.

Sent off as the 2-5 choice in the field of eight, Tepin broke sharply from her outside post but was eased back to fourth place by regular rider Julien Leparoux as surprise leader Glenville Gardens set a pace of :23.38, :46.41 and 1:10.45. Full Mast and Arod stalked in second and third, respectively, with Tepin also in close attendance while clear on the outside in fourth place. Turning for home, Tepin launched her bid as Leparoux took a peek back over his right shoulder to take stock of the competition before moving to the front.

At mid-stretch, the Kentucky-bred mare was leading by a length but then began drifting out slightly.

Tower of Texas, meanwhile, was launching a strong rally on the inside under Eurico Rosa da Silva and his bid fell just a half-length short.

Mutakayyef, invading from England and the second choice at 3-1, closed for third money, a neck behind the runner-up with Full Mast another three-quarters of a length back in fourth.

Arod, Mr. Owen, Glenville Gardens and Passion for Action completed the order of finish. Tepin covered the mile in 1:34.13.

Leparoux, who had guided Tepin to a historic victory in the Group 1 Queen Anne Stakes at Royal Ascot on June 25, acknowledged that she may have been a little rusty on Saturday.

“She got a little tired; she’s been off for three months,” said Leparoux.  “From this race, she’s going to get better later in the year.

“I knew they were not going to give me the race easy, but we had a good post and I could do whatever I wanted.”

Da Silva, while offering all respect due to Tepin, felt that Tower of Texas could have rained on her parade.

“If I had a little bit cleaner of a trip maybe it would have been different,” said Da Silva. “Unfortunately, when I turned for home, I had nowhere to go.

“But when I had room, he kicked on so strong. The filly already had a couple of lengths on me. It’s really hard to make up ground on a good horse.”

“We could have done with a stronger pace but we’d never have beaten the filly,” said O’Neill. “If one or two things had gone in our favour I think we definitely could have been second.”

Owner Robert Masterson indicated that Tepin was looking long-term to the Breeders’ Cup but could have an interim run at Keeneland, which will host the Grade 1 $400,000 First Lady, a one-mile turf race for fillies and mares which she won last year, and the Grade 1, $1 million Shadwell Turf Mile for both sexes on the Oct. 8 program.

“She’s won three Grade 1s at Keeneland, said Masterson. “She likes to run. We’re better off running than working her. It’s a long time before the Breeders’ Cup.”

Norman Casse validated the Keeneland plan.  “We’re going to look at it, and pick the easier of the two,” said Casse.