In an effort to promote equal opportunity in determining the winners for 2017, voting began January 12, 2018, allowing for statistics from the entire year to be considered.  The Jockey Club of Canada announced the top three finalists in each category as determined by the online ballots of the Jockey Club of Canada’s knowledgeable voters.  The media category awards were determined by the Professors of Humber School of Media Studies and Information Technology, in Toronto, Ontario.

The Jockey Club of Canada is pleased to announce the 2017 Sovereign Award winners in the order in which they were presented. 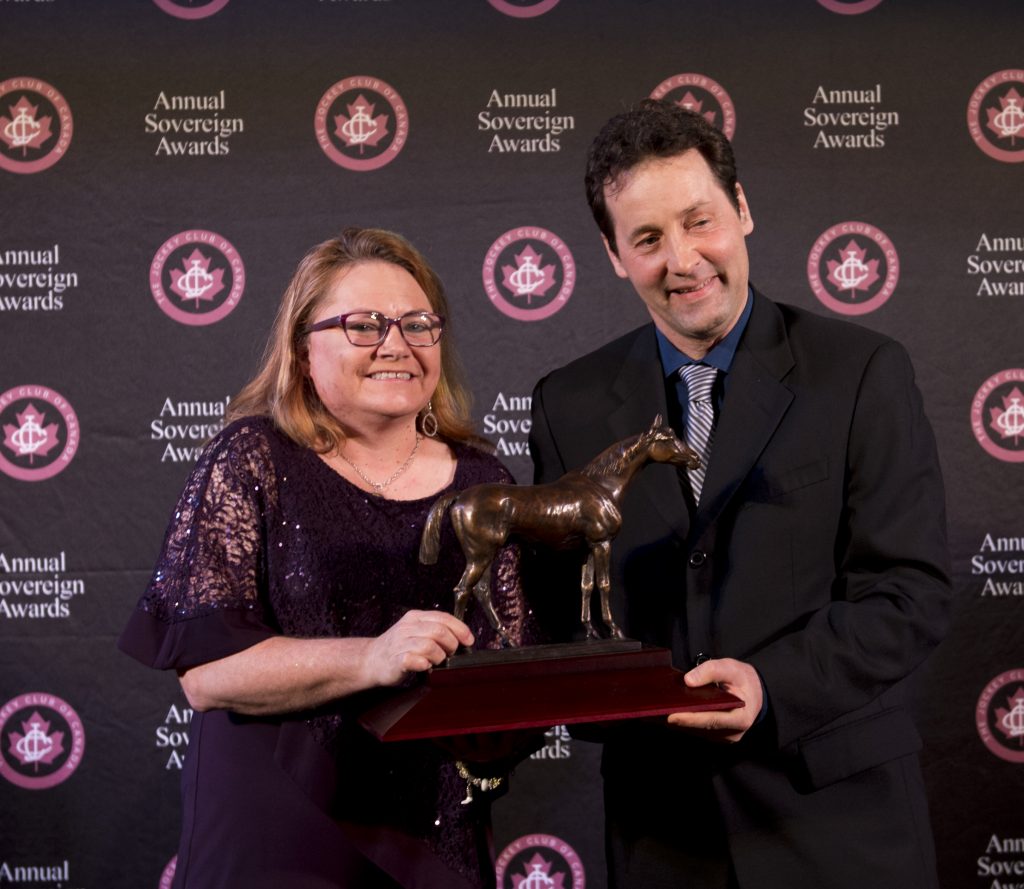 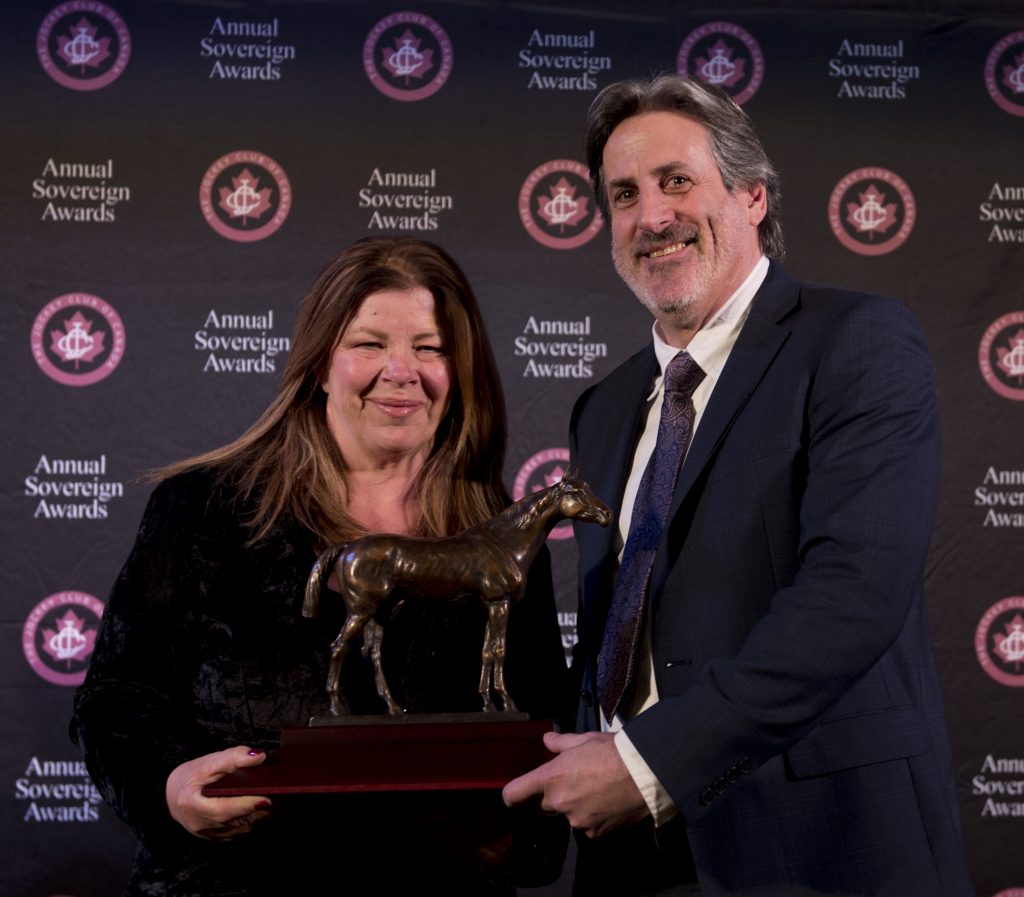 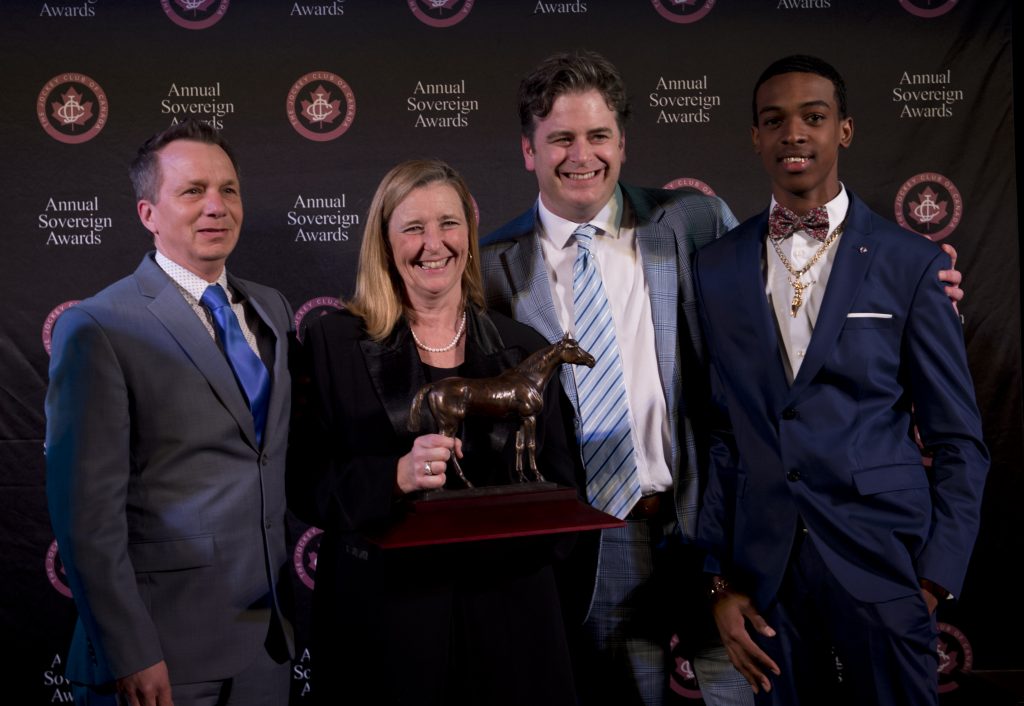 “When I found out I got this scholarship I was thrilled. I became the kind of student who not only worked hard for myself but tried to help other people have success as well. It’s been a really rewarding experience to this point, especially considering I’ve been paying for most of my schooling out of my own pocket.” 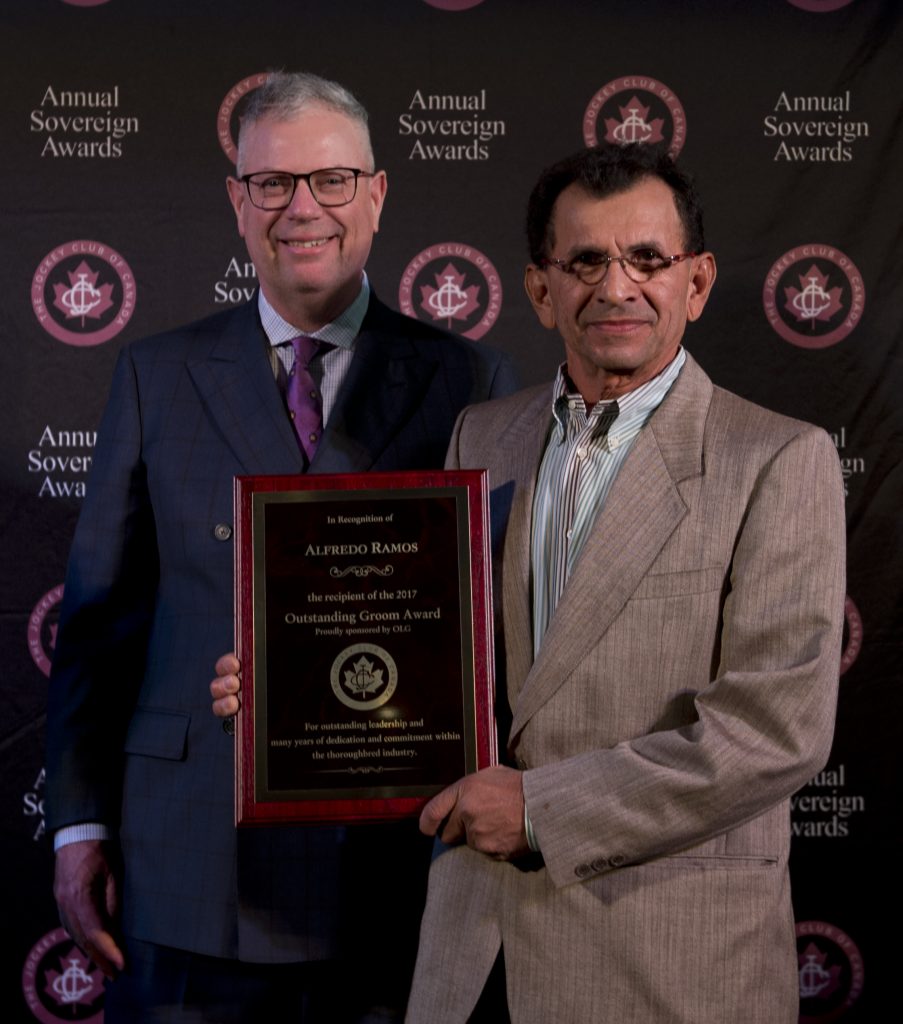 Outstanding Groom Award: Alfredo Ramos
Born in Nicaragua, Alfredo Ramos has a name for himself as one of Woodbine’s most dedicated grooms, a job he started soon after arriving in Canada in the late 1980s.

Alfredo has played a major role in the success of dozens of racehorses for Roger over the years and is easy to spot in the Woodbine paddock as he is always sporting a big smile.

“Alfredo is very reliable and hard working,” said Roger. “He is well deserving of the Groom Award.” 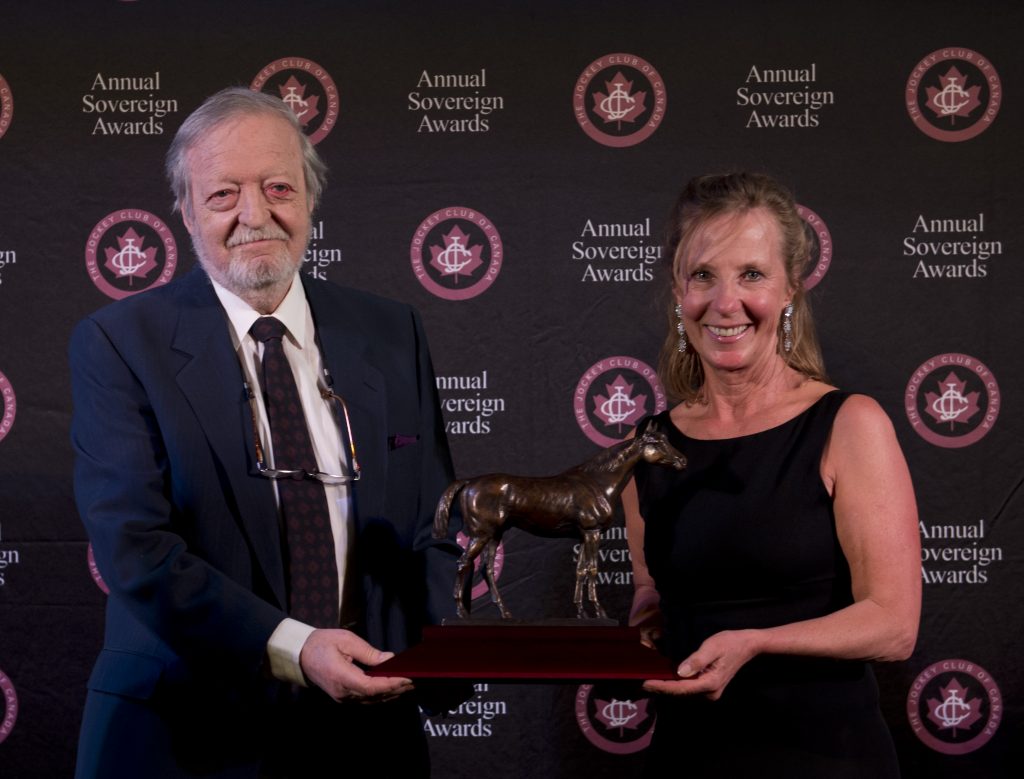 Victorious Ami’s five winning foals were led by the brilliant mare Ami’s Mesa, who had victories in three graded stakes events in 2017, including the Grade 2 Presque Isle Downs Master’s Stakes. A finalist for Champion Older Mare and Champion Female Sprinter for 2017, Ami’s Mesa earned over $588,000 during the year. Victorious Ami’s third foal, Ami’s Holiday, won the 2014 Breeders’ Stakes and 2013 Grey Stakes (Grade 3) and earned over $817,000. The mare has also produced stakes placed Victory Exchange, has a 2-year-old colt by Into Mischief and a yearling colt by Flatter. 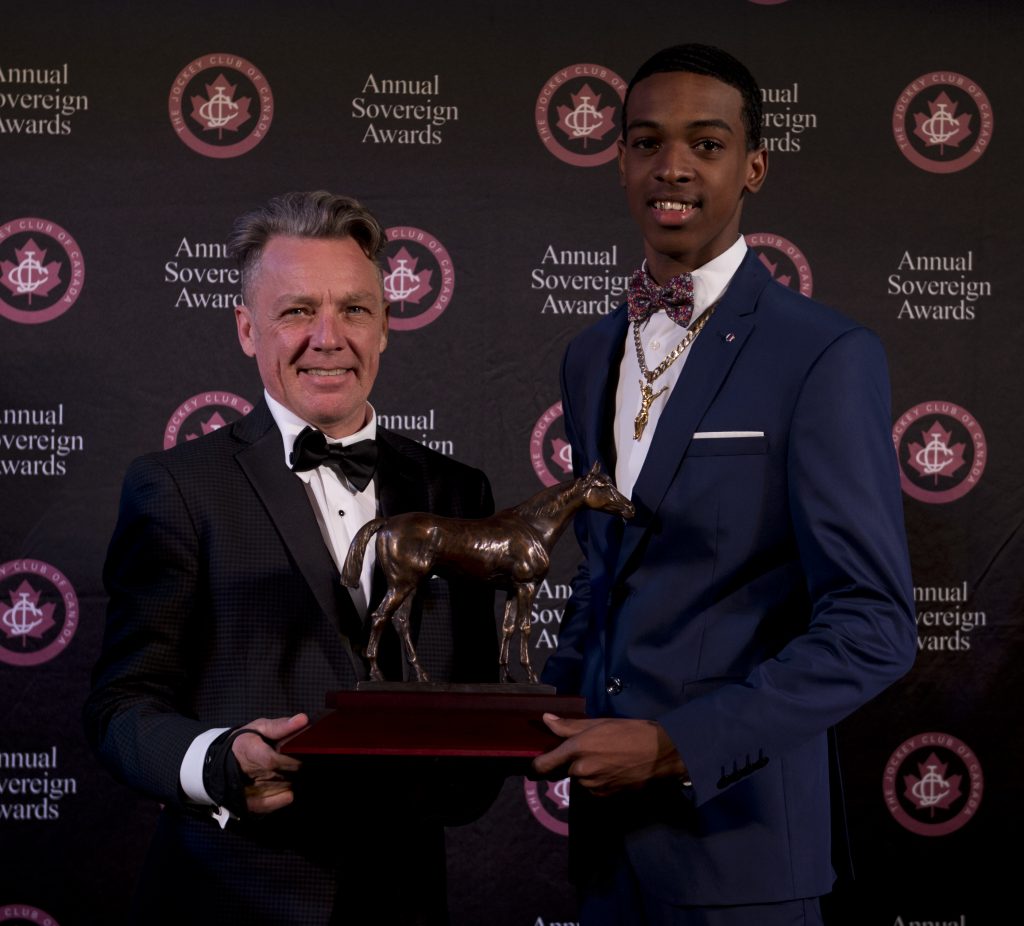 Barbados-born Rey Williams was Canada’s leading apprentice jockey in 2017 with 41 victories at Northlands Park and Century Downs in Alberta. A bettor’s favourite with more than 50% of his mounts finishing in the top three, Rey was the sixth leading rider at the Northlands. Rey rode Mister Jangles to a 7 to 1 upset win in the $50,000 Red Diamond Express Stakes and orchestrated another big win with Piper Rose in the $50,000 Alberta Oaks. 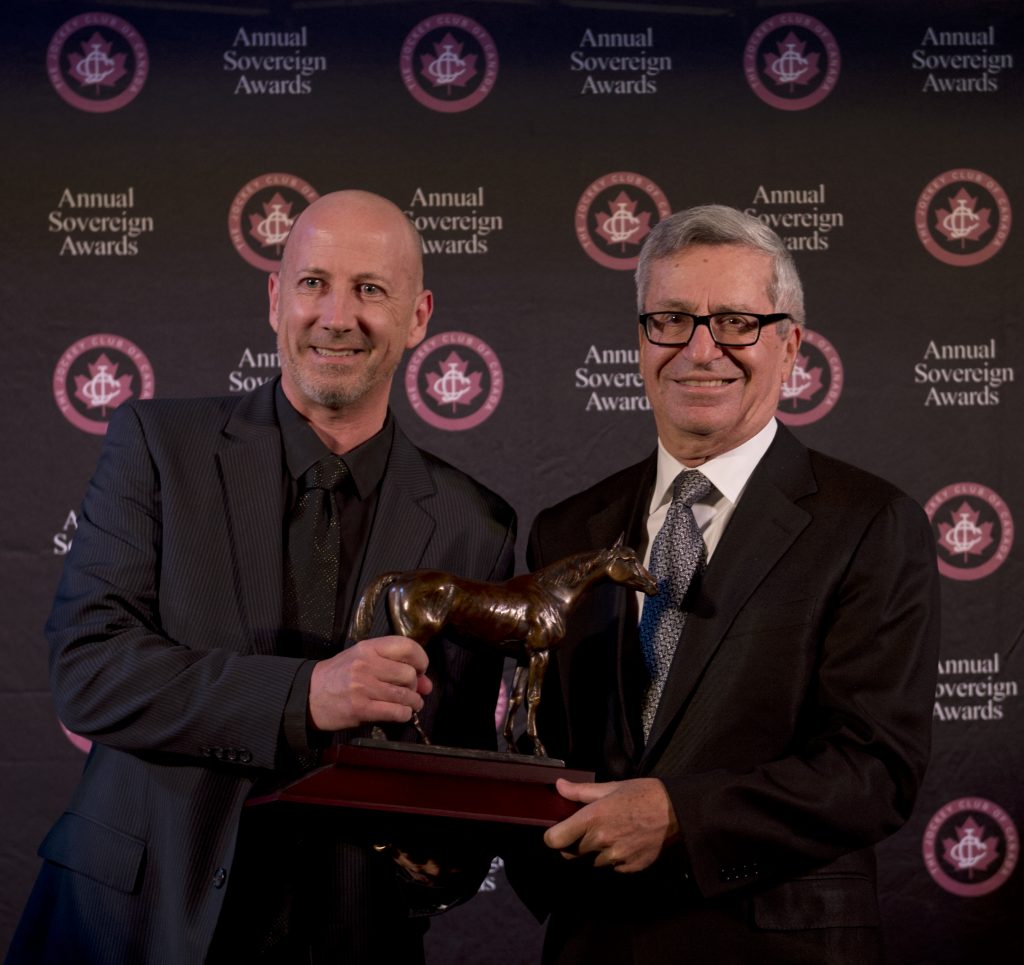 Michael considers one of his specialties in handicapping the ability to pick out a lone front runner in a race, citing that he loves his horses to be “on the engine”.

The growth of handicapping tournaments in Thoroughbred racing has been rapid in recent years and Michael emphasized the importance of horseplayers in the sport.

“For me, that Sovereign Award is more than just the icing on the cake,” Michael told HorseTourneys director of communications Eric Wing. “It is really special and carries a value that transcends the other prizes. Not to equate myself with the great achievers in the sport, but handicappers certainly do play a critical role in the industry.” 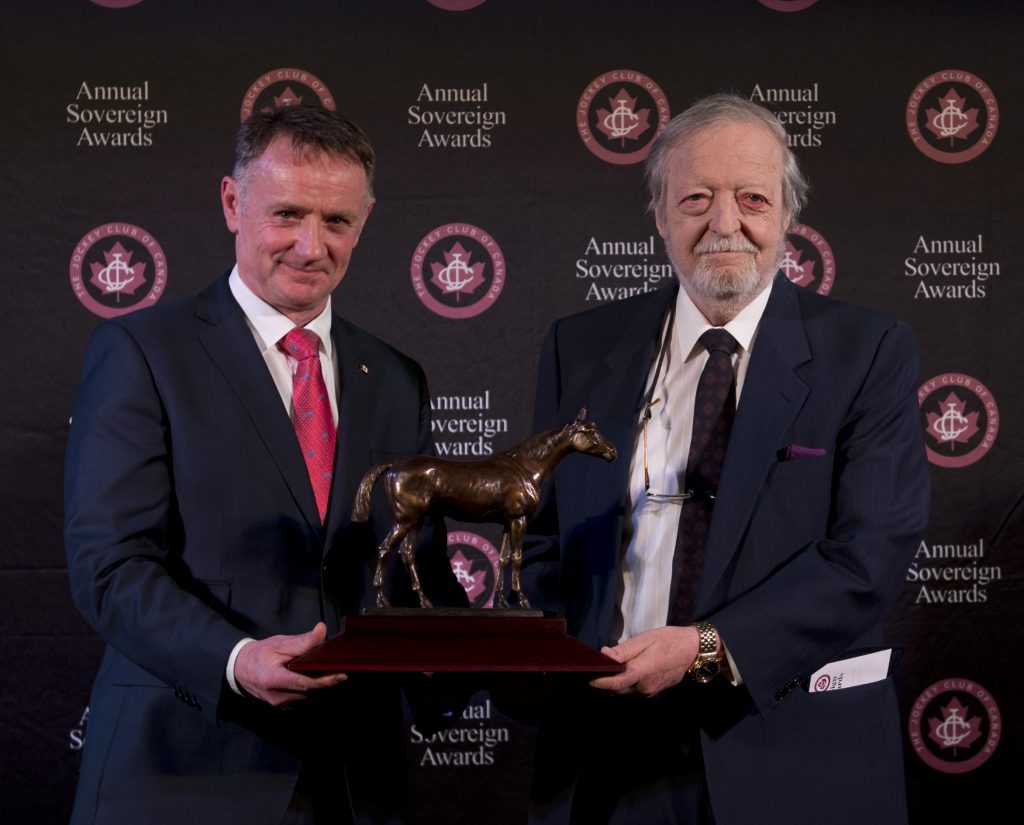 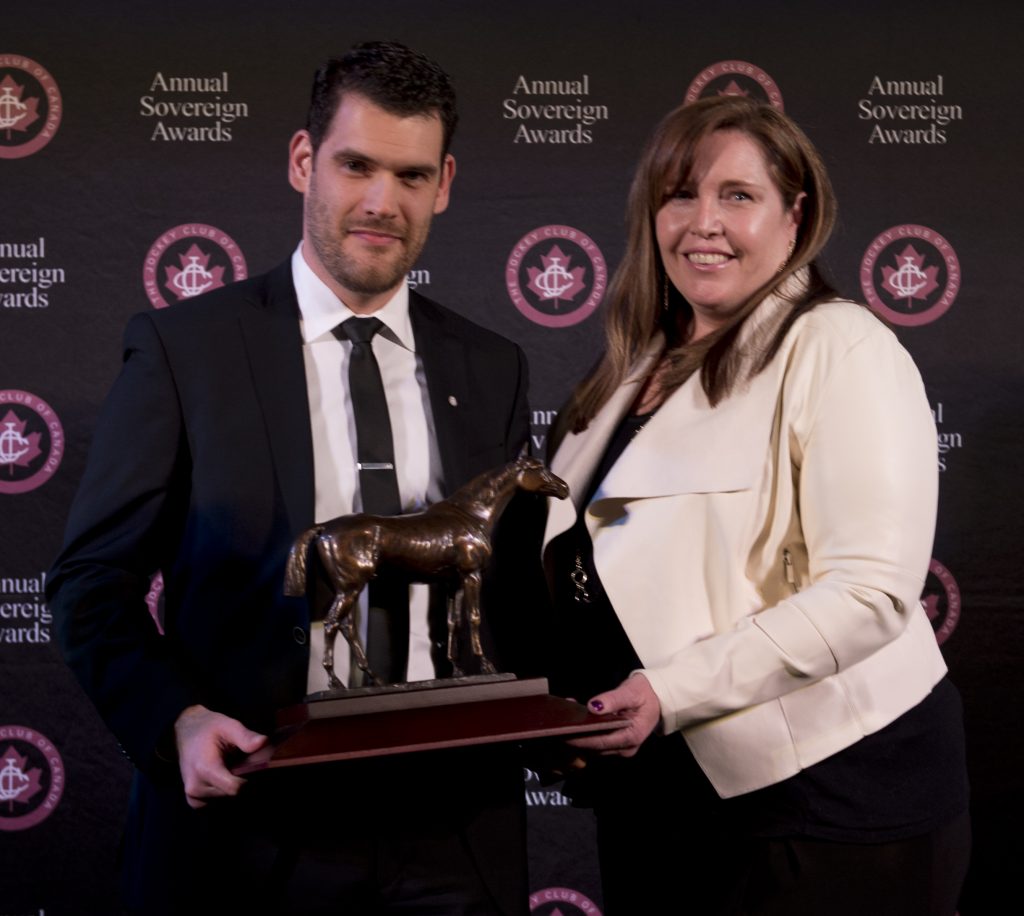 Mark Casse’s stable had another strong season in 2017 with 96 winners and purse earnings of over $5.4 million. The season highlight being World Approval’s win in the Grade 1 Woodbine Mile, the second consecutive Woodbine Mile winner for Mark. Woodbine stable stars also include 2017 Sovereign Award finalists Wonder Gadot, as well as Field of Courage and Sovereign Award finalist Enstone. 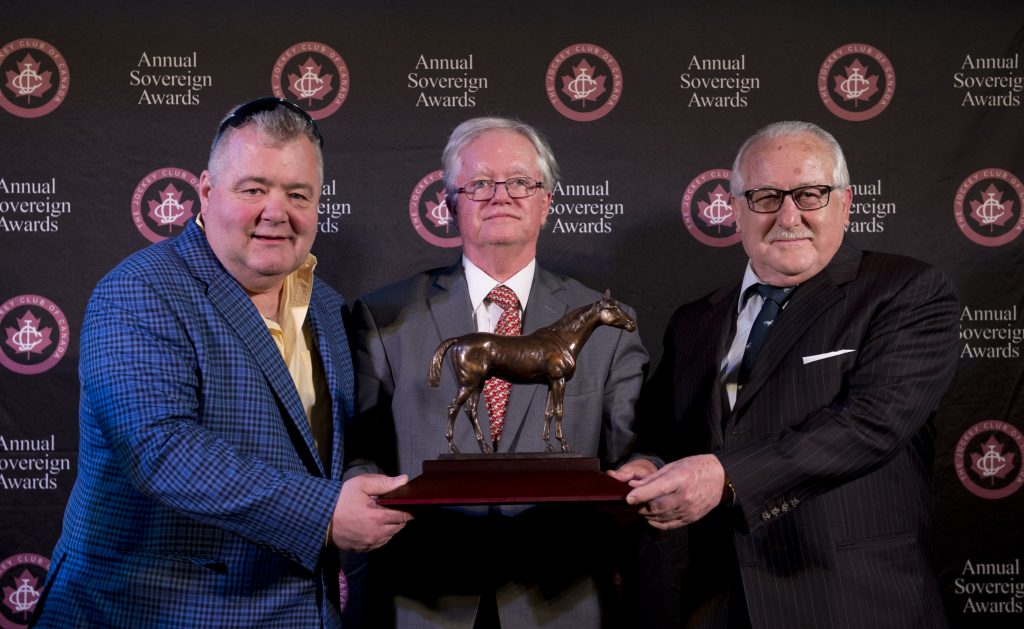 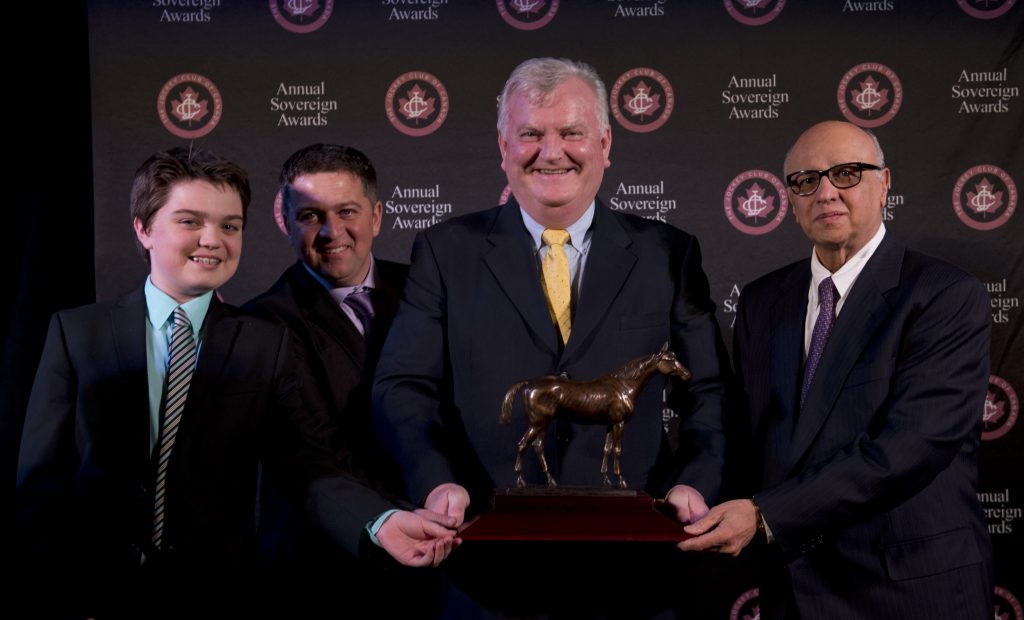 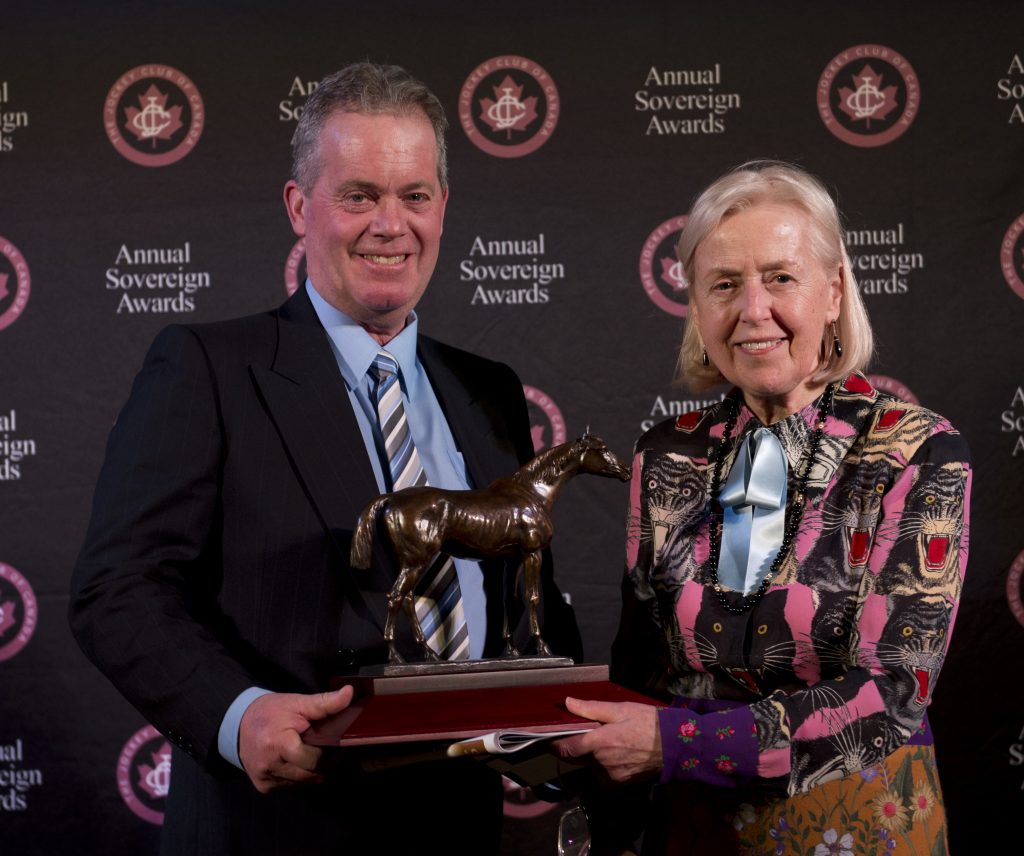 Frank Stronach’s Adena Springs had eight individual Canadian-bred stakes winners in 2017 including Holy Helena, who won the Woodbine Oaks and Queen’s Plate for the farm. Shaman Ghost , another Stronach offspring of Ghostzapper, had a big year racing in the U.S. with victories in the Grade 1 Santa Anita Handicap and Grade 2 Pimlico Special. Other Canadian-bred stakes winners from the Adena Springs include Grade 3 winner Shakhimat and 2-year-old stakes winner Glamanation. 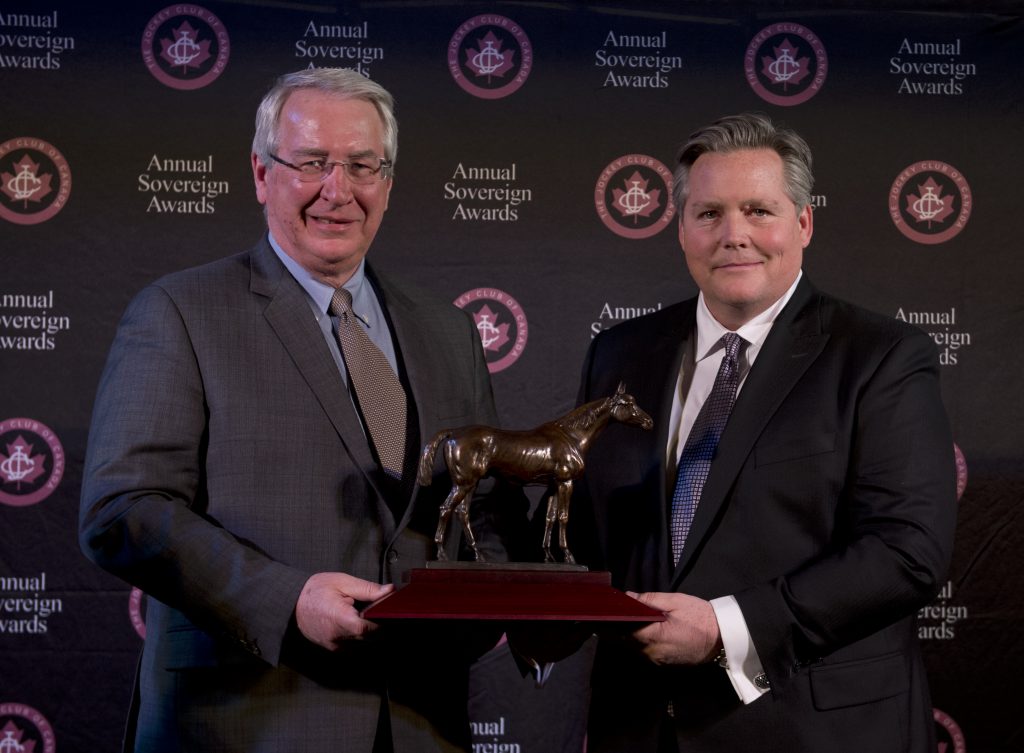 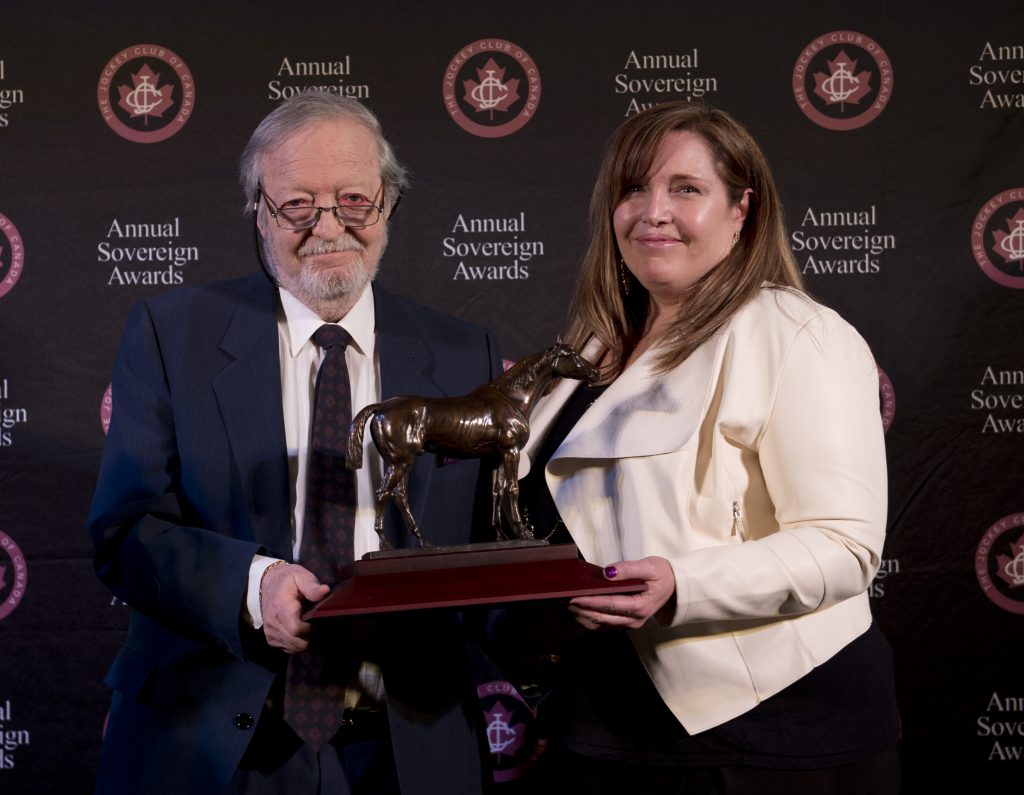 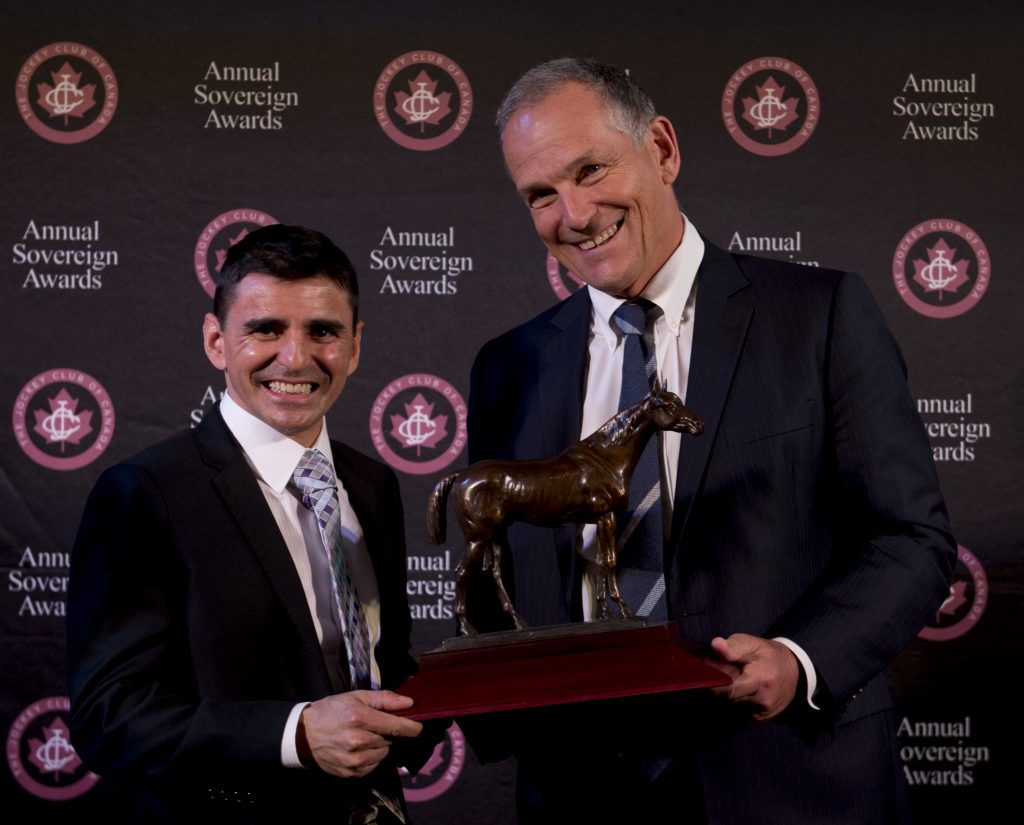 Eurico Rosa da Silva won a remarkable 34 stakes races in 2017. One of the biggest victories of the year came when he rode American invader Bullards Alley to a 42 to 1 upset in the Grade 1 Pattison Canadian International. Eurico was also an integral part of Pink Lloyd’s magical season, who won eight stakes races in 2017. Other stars ridden by Eurico include Sovereign Award finalists Dixie Moon, Melmich and Mr. Havercamp. Eurico also did Canada proud when he won Japan’s World All-Star Jockey Challenge in August. 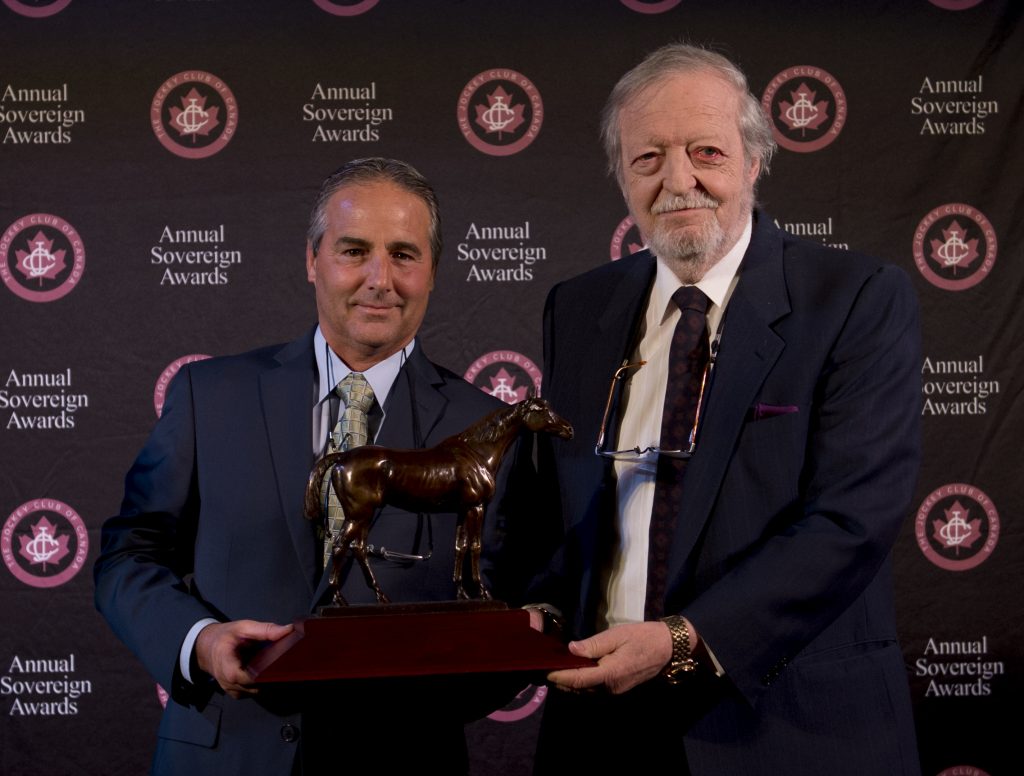 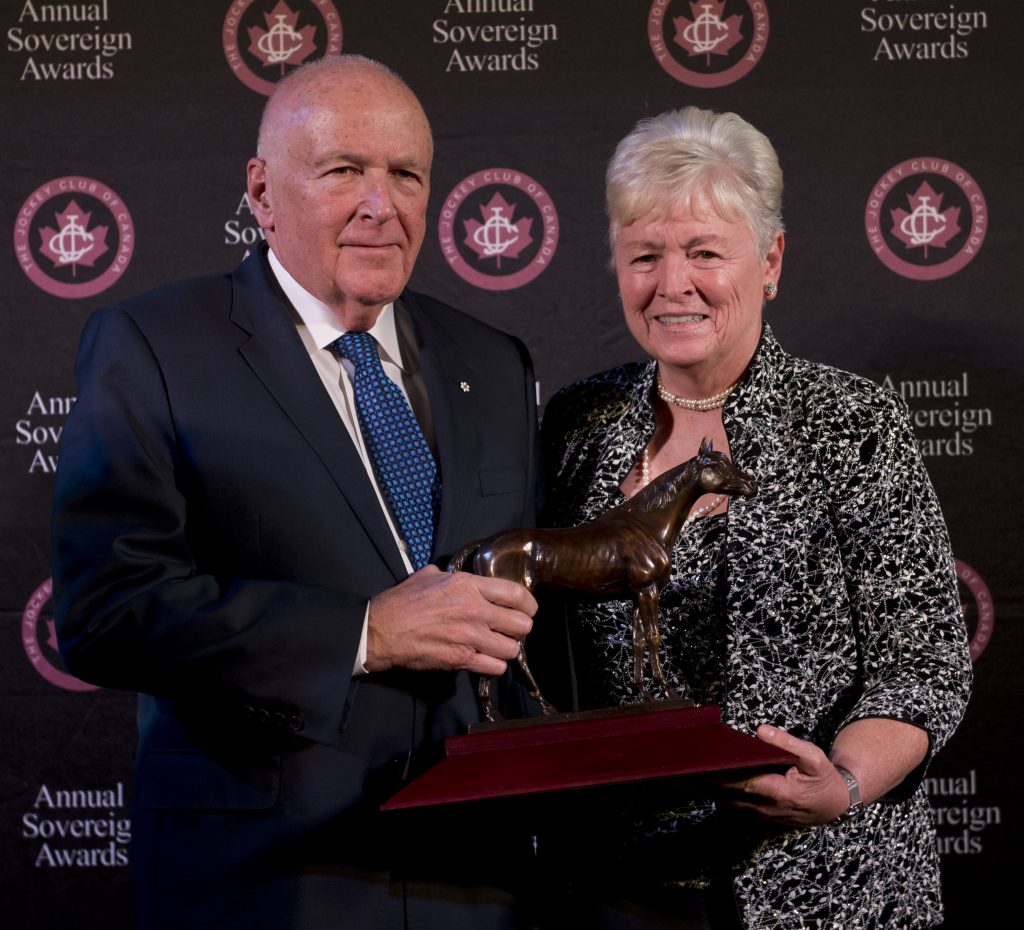 This is the first nomination for Robert and Mark Krembil’s Chiefswood Stable which has divisions in King City and Loretto, ON. Its purse earnings of over $2.2 million in 2017 was the most earned by Chiefswood runners in the stable’s history. Stars for the Krembil family in 2017 include Tiz a Slam, a finalist for 2017 Champion Three-Year-Old Male, as well as Yorkton, a nominee in this year’s Sovereign Award Male Sprinter category. 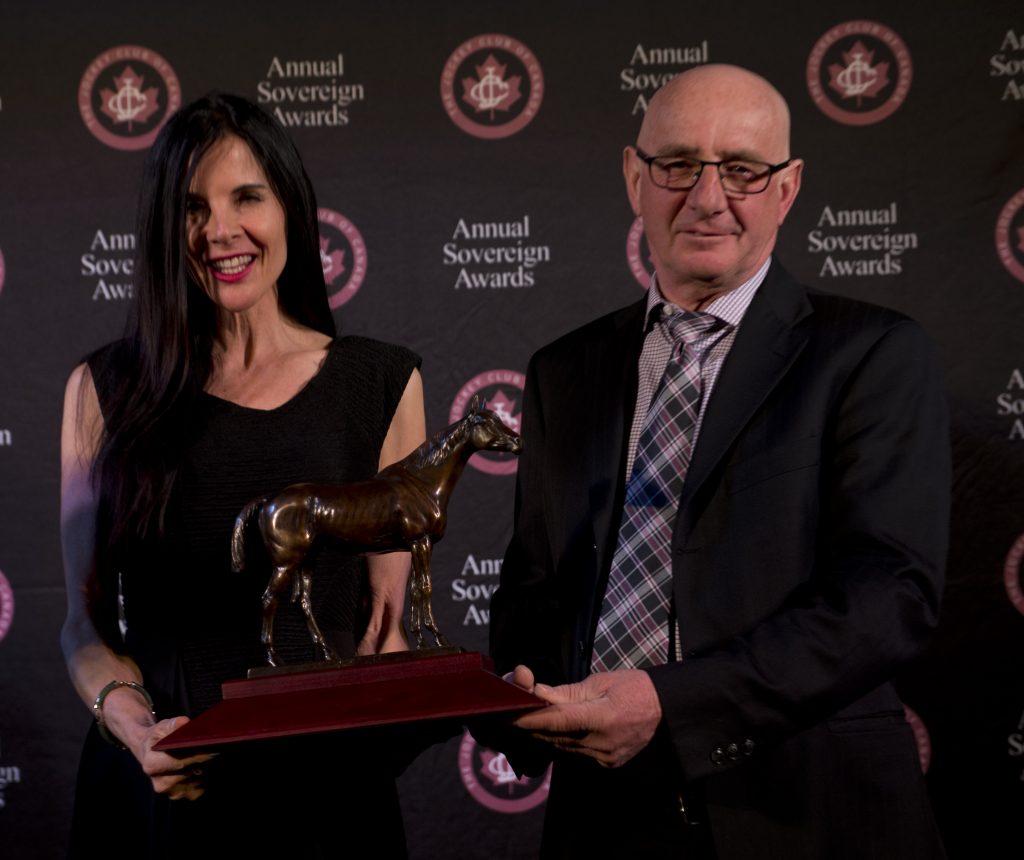 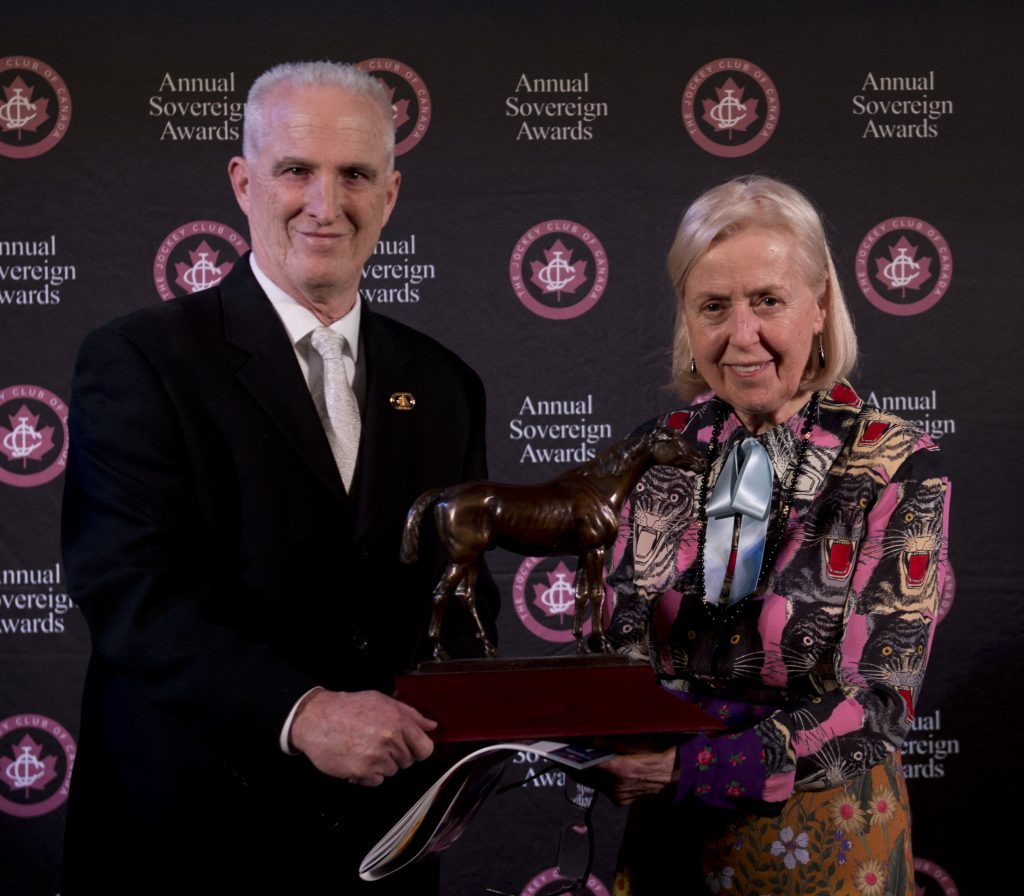 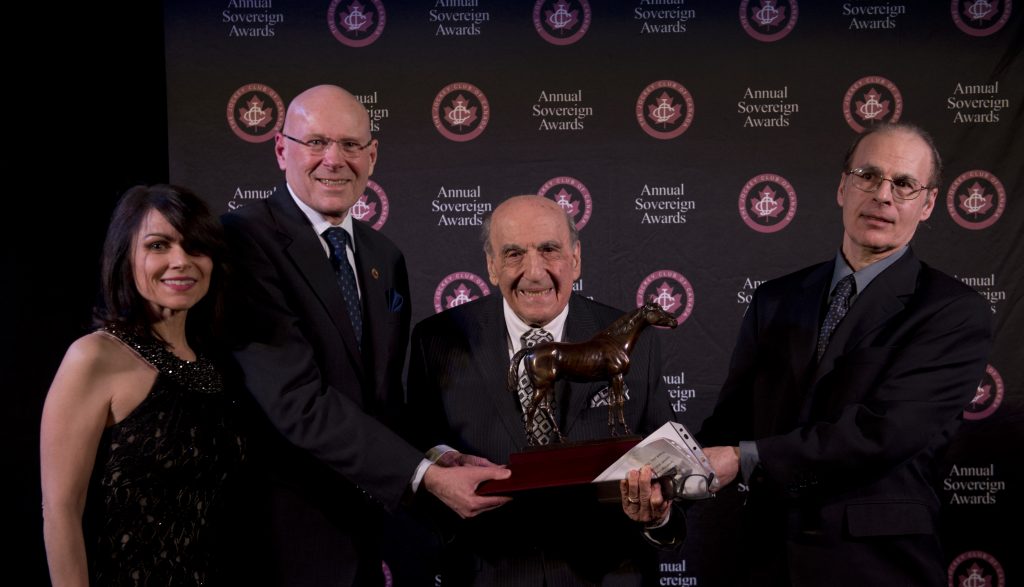 As an enthusiastic horse owner, horseplayer and long-time member of the Horsemen’s Benevolent and Protective Association (Ontario), Sam is one of the most recognizable faces at Woodbine and a tireless supporter of the sport. He has led the Toronto Thoroughbred Racing Club, a fun group for fans with monthly meetings and track and farm trips since 1972.

Sam has been a passionate and active director for the HBPA since 1972 and has played a role in many policies including getting fifth-place purse money for horsemen, the construction of a new dormitory, and financial benefits for horsepeople from simulcasting and uncashed tickets.

Sam and his wife Frances and daughter Carolyn have continued with the popular Toronto Thoroughbred Racing Club which celebrates it 57th year in 2018. On most weekends, you will find Sam on the fourth floor at Woodbine playing the races and seeking out guests for the Club’s next monthly meeting.

Horse of The Year: Pink Lloyd

For more information on The Jockey Club of Canada’s annual Sovereign Awards Ceremony contact Camille Casse at 416-675-7756 or jockeyclubcanada@gmail.com.