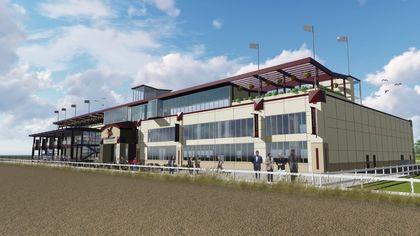 Artist’s rendering of the proposed Century Mile Racetrack in Alberta

The Alberta Gaming and Liquor Commission (AGLC) has given its approval for a new racetrack to be built south of the city of Edmonton.

CTV News-Edmonton reports that the new $50 million facility, being planned by Horse Racing Alberta and Century Casinos, will be built near the Edmonton International Airport. It will be called the Century Mile.

“It was the news we were certainly hoping for, and it is a really good news day for the horse racing industry in the province,” Shirley McLellan, CEO of Horse Racing Alberta, said.

The Century Mile will replace Northlands Park, which is scheduled to close June 30, 2018.

Construction is expected to start this spring.